Indeed, draw your own conclusions...... 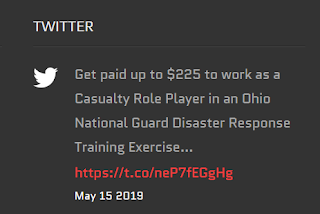 Two of those names are Clapper and Brennan.

Draw your own conclusions.
https://www.linkedin.com/in/kurt-m-marisa-5b67b311


What do we know for certain about these "events" "?  They are driven by the desire of certain "chosen" groups to implement gun ownership restrictions.  Criminals don't obey laws-including gun laws.  So, it's all about preventing law abiding whites from personal protection from criminals and the government (I know, I know, the government is nothing more that organized criminals using tax as theft)

In most recent cases, NZ alleged shooting, Orlando, Las Vegas etc. the "stories" coming from the authorities are absurd.  Multiple shooter were reported in both the Orlando and Las Vegas "events" which were obviously staged using deep state "assets".  A geriatric patsy and mentally ill kid were chosen to be the shooters despite their complete lack of experience and training in firearms.  In the case of NZ the video confirmed no one was killed-it was completely FAKE.

The banned video was actually like a bad Monte Python skit with the "killer" shooting a "phantom" victims on the street while cars rolled by not even noticing the "shots", trying to shoot out his own car windows and failing (those damn blanks-forgot about them!) and "shooting" victims conveniently piled up in the buildings who never attempt to escape.

(I guess if you "escape" you don't get paid)

And, in the most investigated "event" Sand Hoax, we know the school had been closed for years due to asbestos problem and no one was killed.  No death certificates nor autopsy reports were ever provided and the "victims" weren't even put on the SS death list-until it was pointed out several days later.  There were some hilariously bad crisis actors however.

And the Shooter was actually listed as dying the day before the "event".  Obviously, an Obama staged FEMA drill to implement gun restrictions.

If the government puts out a "story", whether it's 9/11, Pearl Harbor, Sandy Hoax, the Holahoax etc. you know it's just a fairytale.

Only the gullible believe anything the government says.  Don't be a sucker.