stock here:
This was boring and tedious, but I think real Journalism, because no one else has tried this.

Rather than spin it as a gun grabber, or a 2A pundit...I simple made a table, with names, ages, how they made a threat, and what the threat was, and how they were "found out".   And a link to a story about them.

BOTTOM LINE: Almost all of these arrests were warranted, and they should result in a more civil society.    These people were breaking the law, making threats or terroristic statements.    They have been "activated" by the rantings of Main Stream Media, Hollywood.   The violence that pervades the country and is shouted out continuously by MSM, has made people believe that it is OK to toss threats out, even documenting them in writing.

There are quick a few young and very young people in here.    A few older, 38 being the oldest.   The older ones seem to have a common trait of being pretty crazy.

MSM is so sloppy they twice reported the exact same person as two different "events" and arrests.   CNN breathlessly pimps out 30 Arrests, when the reality is 24.   As if 24 weren't enough to be amazing, they just had to pimp it out further.   It's like they feel obligated to lie.

A picture of spreadsheet is a bottom.   But here, you can download my actual spreadsheet, and use the working hyperlinks for your own review of the actual event.   Its in EXCEL

Spread this far and wide. 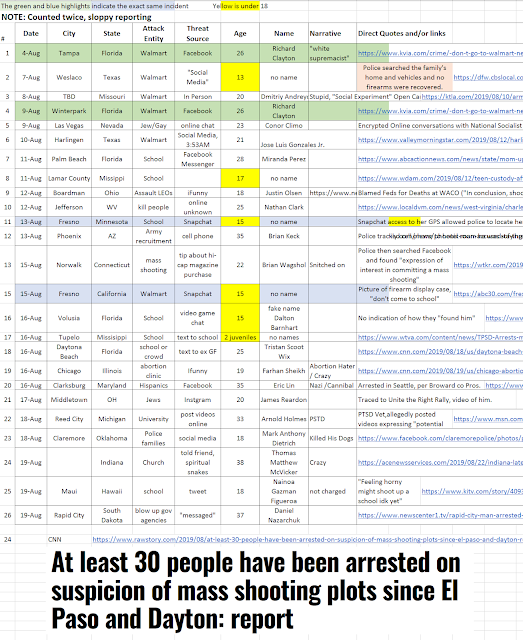