stock here -- the new meme is that it is "Angry Young White Men" causing all the trouble.   Well they got the last 3 "right".   Doesn't that seem odd to you? 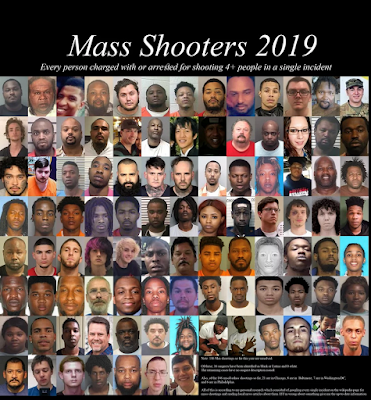 They decided to do 2-in-a-row this weekend probably because everyone seems to be getting numb to the mass shooting trope and so Operation Chaos has to shock the collective consciousness again. Fear fear fear is the byword. "You need us to step in and take the guns away", "You need us to defend against terrorist Iran" and so forth. Buy more crap you don't need with debt that enslaves you to your pointless job, suck that flouride water down so your 3rd eye doesn't see through this thick cloud of deception and malevolence and don't think about real shit, just idly chat about references to the false, trivial and superficial media that they feed you.
It sounds crazy on the face of it until you start understanding just how evil these people are and how sophisticated and ballsy they are. And how long this operation has been going on... It's a lot longer than a few years, that's for sure.


The official news narrative about the El Paso WalMart mass shooting is largely fabricated. Even though the violence was real, and people were really shot and killed, the narrative surrounding the tragedy is almost all fiction.

Five huge questions are screaming out for real answers:

#1) If there’s only one shooter, why did so many eyewitnesses report multiple shooters at the scene?

#2) Why did the local police arrest and hold three suspects in custody, as was widely reported by the media before the story was changed to a “lone shooter?”

#3) Why does the so-called “manifesto” appear to be written by someone far older than 21 years of age? (Answer: The manifesto is a hoax. It was not written by the individual who was arrested as the shooter.)

#4) How does one man kill 20 people and wound another 30 people with a single magazine that only holds 30 rounds? The surveillance photo shows no chest rig, no battle belt and no spare magazines.

#5) If the shooter is on a suicide mission, why does he bother to wear both eye protection and ear protection? Answer: Because he knows he will survive his “mission” and be taken into custody after surrendering to police. It wasn’t a suicide mission at all. Eighteen months from now, the world will have forgotten the name of the shooter, and the media will never report anything about him again.

(He will likely be relocated under the witness protection program, living under a new identity after having completed his “mission” for the deep state.)

ONE MORE QUESTION: Why was the shooter’s online profile changed from “Democrat” to Republican / Trump supporter / QAnon follower?

Clearly the deep state is modifying his online profile to match their own conspiracy theories and official narratives about QAnon followers being “domestic terrorists.” This is Orwellian-level psyop stuff being run on the entire nation…

In summary, the official narrative doesn’t add up. In fact, it’s all a “staged violence” event which combines real violence with a fake narrative to achieve a specific political purpose.

In this case, the goal is the complete disarmament of the American people, blaming Trump for everything and positioning illegals as “victims” of a mass shooting when, in reality, it was Americans who were actually shot.
Posted by Stock at 4:46 PM