Epstein Death Faked? ZERO Instances of Suicide at That Prison

And of course, the Liberal LA Times, immediately jumps to conclusions, while stating that other
conspiracists, like the President, ought not to jump to conclusions.


Service found that about 8% of suicides in correctional facilities occurred even though an inmate was on suicide watch. According to the report, the vast majority of suicides (more than 90%) are hangings, with the second most common being drug overdoses. Reports suggest that Epstein was having a difficult time adjusting to life in custody. In the end, a medical examiner’s investigation will draw conclusions about whether he took his own life as a result. In the meantime, the rest of us — including the president — should back off the conspiracy theories and wait for the facts to emerge.

Its in German, but the Closed Captions works well, as per example here, its easy!

This is in German, but the CC is good enough to get that Italy's Berlusconi may have a child sacrifice set up like the "tennis court" at Little St. James. 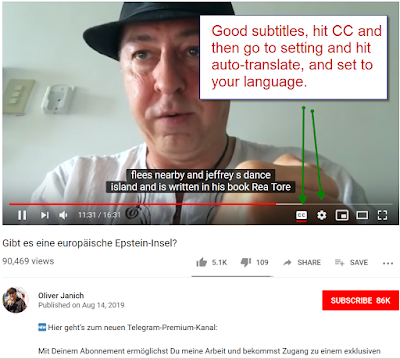