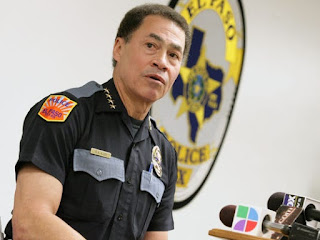 stock here - my original research, no one seems to have picked up on this yet.
This police chief called out BLM in July, and "they" responded with a mass murder in his city.

Months ago I predicted that mass shootings, and other false flags would occur on a daily and sometimes s a day basis.   As the Deep State is being exposed for their satanism and pedophilia among other more traditional high crimes.....

Beto O'Roukeand other deep staters who particularly want open border and cheap votes that are effectively bribable, shouted that the the Chief needed to be held accountable (punished).


forcefully and unequivocally, and hold Chief Allen accountable for damaging the public trust and bringing disrepute to our community."

The jew owned media immediately label this as a "hate crime", LOL, because shooter was white, even though the superbly corrupt FBI stated there is no evidence of a hate crime at this time.

I see, correctly identifying one of the enemies, gets oneself attacked.    And to punish him, they created a mass murder, at least 20 dead, at the intersection of Walmart and Hooters.


These folks are complacent, complicit, or the chief pushers of the demise of the USA as we knew it.
Mostly Democrat (maybe all), and quite a few Hispanics.

signed by:
Then within 24 hours, another mass shooting in Ohio.   Texas and Ohio and both kind of swing states for national elections.   Texas is already "won" by the deep state and open borders regimes, so this "victory" in previous gun toting, straight talking Texas is a "success" to build upon.     And Ohio went to Trump, so important to show how evil Trump allowed this Ohio shooting to happen.

Now the FBI has completely taken over the "investigation"


El Paso police Chief Gregory K. Allen said at an evening news conference that the crime appears to have “a nexus at this point in time to a hate crime.”


Of course the plot is not just disarming the public, but censoring any real discussions or news.    After the eff-bee-eye came out 2 days in a row stating how "conspiracists" can be domestic terrorists, in particular, 8-chan,4-chan, VOAT, etc.....

The document police believe the suspect wrote was posted on 8chan, an online messaging board full of racist, bigoted and anti-Semitic content. A CNN analysis of the document reveals it was posted less than 20 minutes before police received the first calls about the shootings.