Will the Epstein "Era" of Sex / Satanism / Blackmail Expose the Real Criminals? 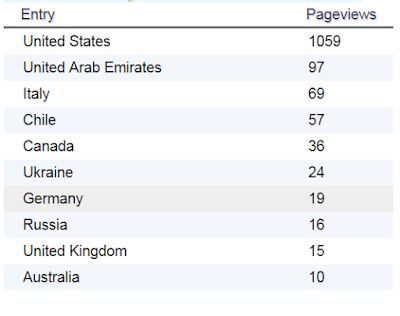 Just a thought, say I know maybe 200 males well enough to know them.....I would say maybe 2 of them are "racists".

Of the hundreds of thousands of male female interactions I have observed in my life, in my circle, I would say I have seen 3 or 4 instances of "harassment" whereas my friends totally indoctrinated snow flake college girl feels that she is "harassed every day".

this story not mine at all, a good one sent in by Fukushima legend "Horse"

But this is interesting.....who is reading Nukepro right now?    I have NEVER seen the UAE in the top 5 list of viewers.

autists should dig the connection between Epstein and UAE.


As billionaire pedophile and alleged sex-trafficker Jeffrey Epstein sits in prison, reports have continued to surface about his reported links to intelligence, his financial ties to several companies and "charitable" foundations, and his friendships with the rich and powerful, as well as top politicians.

While Part I and Part II of this series, "The Jeffrey Epstein Scandal: Too Big to Fail," have focused on the widespread nature of sexual blackmail operations in recent American history and their ties to the heights of American political power and the U.S. intelligence community, one key aspect of Epstein's own sex-trafficking and blackmail operation that warrants examination is Epstein's ties to Israeli intelligence and his ties to the "informal" pro-Israel philanthropist faction known as "the Mega Group."

The Mega Group's role in the Epstein case has garnered some attention, as Epstein's main financial patron for decades, billionaire Leslie Wexner, was a co-founder of the group that unites several well-known businessmen with a penchant for pro-Israel and ethno-philanthropy (i.e., philanthropy benefiting a single ethnic or ethno-religious group). However, as this report will show, another uniting factor among Mega Group members is deep ties to organized crime, specifically the organized crime network discussed in Part I of this series, which was largely led by notorious American mobster Meyer Lansky.

By virtue of the role of many Mega Group members as major political donors in both the U.S. and Israel, several of its most notable members have close ties to the governments of both countries as well as their intelligence communities. As this report and a subsequent report will show, the Mega Group also had close ties to two businessmen who worked for Israel's Mossad — Robert Maxwell and Marc Rich — as well as to top Israeli politicians, including past and present prime ministers with deep ties to Israel's intelligence community.


Did Bill Barr Call His Shot? Unanswered Questions about FBI’s Foreknowledge of the El Paso Shooting

Mass-casuality events in the media-sphere remind me of watching cattle producers manage bovines in feed lots. Electric prods and body-count media are tools for desired outcomes.

Barr’s father, Donald, was CIA. He was a scout/recruiter at upscale east coast prep schools and helped manage the Paperclip program post WWII. The now AG was also CIA. He was deeply involved in Reagan/Bush insurrections in Central America. Which means he had a hand in drugs for guns. It is reported he flew with Oliver North to Honduras to recover a cash package that had gone missing. Dig into Barr’s background, or ask others to grab a shovel, bring lanterns, suction pumps and hoses.