Peak Life -- Stress, Strife, Confusion, Propaganda -- All Unite To Shorten Our Lives, It Is Happening USA and UK

The UK is Toast.    They have severely accelerating decrease in Life Spans.

I predict that after Brexit, if done right, that will slow and even stabilize.

I searched the CDC site, and came up with a goose egg for new Life Expectancy figures.    Maybe it's 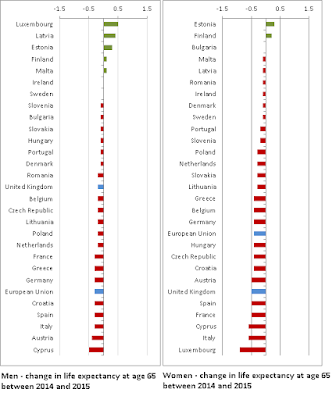 there and I just didn't find it.

Seems like an inconvenient truth, that wouldn't be in Governments own perceived "best interest" to promote.

In 2015 and 2016 information was much easier to find, they were still in the "might be a blip" stage.
https://www.nukepro.net/2016/12/us-life-expectancy-going-down-overall.html

Table to right is 2014.2015.     Very interesting, although it is a small country of  617,000 so their stats can change much more easily...but men's LE went up the most in one year, and women's LE went down the most.   Very odd.   Maybe women can't stand being the epicenter of the Globalists.

This article contradicts the above article of a second drop in 2016.

For those conspiracists who imagine that there is a "white replacement" policy in the USA, at least the globalists, it seem to be bore out by the facts.   Low birth rates and high death rates.

Blacks and Hispanics were unchanged.

But VOX wants to spin this as INEQUALITY in their Science and Health section
https://www.vox.com/science-and-health/2018/1/9/16860994/life-expectancy-us-income-inequality 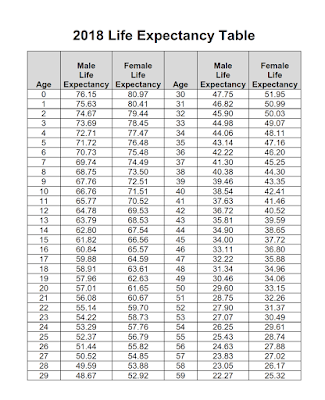 I have not been able to find anything on 2018 except for one PDF shown here, if you average the
Male and Female, you see 78.56 which would be a drop compared to the AAFP 2017 data of 78.6.
https://www.health.ny.gov/health_care/medicaid/publications/docs/gis/18ma008_attachment_1.pdf


Let's make sure we let Big Education in to take a pot shot at guns......see if you can follow the math.   I'll put it in a table so the "narrative" is obvious.

Stanford says......but there data is summarized in this table

“Higher suicide rates in rural areas are due to nearly 60 percent of rural homes having a gun versus less than half of homes in urban areas,” psychiatrist and behavioral scientist Keith Humphreys of Stanford University says. “Having easily available lethal means is a big risk factor for suicide.”