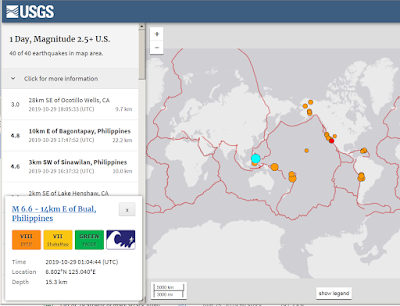 stock here, be on Alert for Damaging Earthquakes and Vulcanism

But I wouldn't say this is the end of the EQ alert, this could be a fore-shock of something bigger.    The solar wind has been lackadaisical and as noted before Kp also no joy.   It seems it must show up eventually by the weekend!    Scary Oct 31 and Nov 1.

We have been watching a triad of Coronal Holes in the Equatorial Range "target Earth".     The Kp index has barely budged so far, so I wonder if this "delay" if some kind of capicitive buffer that will let all hell break loose when the capacitor is full.

I need to head off to a party, so I will flesh out the "evidence" later

The Mexico Volcano issue is interesting.   This twitter is the only video I can find, and it shows 3 large Eruptions (flare outs), one flare out coming from 2 different places simultaneously. 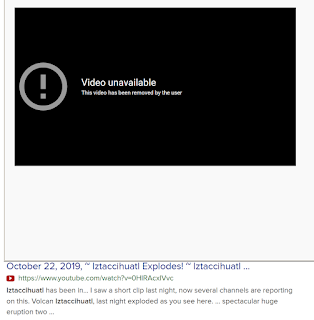 Some people's video has just been taken down.    Odd that a Volcano becomes part of a political 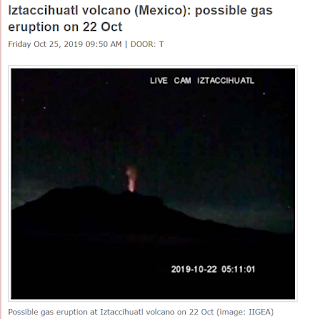 And most sites are still calling it "Extinct" although Dormant would be a better word, except that it is now "Active".    A review of EQ in the area would be interesting.

This Volcano is generally accepted as having 7 "chimneys".

Those who follow me, know my work and research on the Galactic Cosmic Ray (GCR) nucleation of magmatic gases is a cause of vulcanism in certain magma chambers.

And that Quiet Sun, allows more GCRs to pound the sun facing part of earth as the magnetic shield of earth is compressed by solar wind and other electro/magnetic effects.   This is why the Moana Loa (Kilaeua, Pu'u O'o, East Rift) large EQ were all in the wee hours just past midnight.

Iztaccihuatl (a.k.a. Ixtaccihuatl, Izta, or Ixta) is the third highest mountain in Mexico and the seventh highest in North America. An extinct volcano, Ixta is a unique mountain. When viewed from either the west or the east you can distinctly see her; the sleeping lady. The north end of the mountain is 'the head'. A big dip, 'the neck', and then up to the summit of the sleeping lady, her 'breasts'. The rest of the mountain follows in logical progression, the stomach (glaciated), the knees, and the feet which is the sub peak at the south end of the mountain.

Except for that pesky little eruption that just hit 2 days ago!!!