Department of Peacebuilding -- UN / NWO Control Over All Aspects of USA -- And Of Course, Take Your Guns

It's not just this one lady.   And it's not just the Dems.    But it is part of a systemic problem affecting the USA, but exists Worldwide. 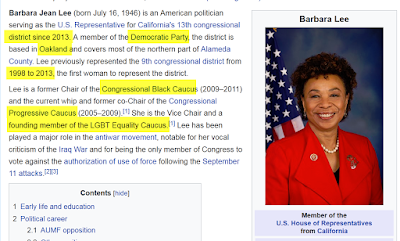 Get to know the face of slavery, she wants your slavery.   And has introduced a Bill in the House.

Politician for 21 years in California

(5) Every year more than 300,000 people are killed by gun violence around the world. In 2017, nearly 40,000 people died in the United States as a result of gun violence; the highest number of gun deaths in nearly 50 years. The rate of deaths—12 fatal shootings per 100,000 residents—is also at the highest point since the mid-1990s. Approximately 20 veterans a day commit suicide nationwide. Every day, 47 children and teens are shot, and each gun injury and fatality results in trauma to family members and loved ones. More people have died fro
m guns in the United States since 1968 than on battlefields of all the wars in United States history.

(6) A World Health Organization report estimates that interpersonal violence within the United States costs approximately $300 billion annually, not including war-related costs. The Centers for Disease Control and Prevention found that the total economic cost of child abuse and neglect is estimated at $124 billion each year.

This at the tail end of item 10.    Kind of amazing that they started this the year of 911, and kind of amazing they point out the Children of the world, whilst UN forces that are supposed to be doing "Child Protective Services" are really doing much child trafficking.


The United Nations declared the years 2001 through 2010 an International Decade for a Culture of Peace and Non-Violence for the Children of the World, and the United Nations supports a culture of peace. In 2015, the UN adopted 17 sustainable development goals, including promotion of peaceful and inclusive societies.

This got me to research the 17 Goals.     They sure are cute little marketing pieces, but are entirely and grossly impractical and goals that cannot be met by any year much less 2030.     By 2030 we will likely be in the depths of a cooling downfall resulting in huge economic and food losses.   This is the worst possible time to spend money foolishly.

See cute soundbites.    But even when you just read the full title to each section, the "narrative" is quickly displayed.

Those deserve their own article.   I'll make a draft at least.