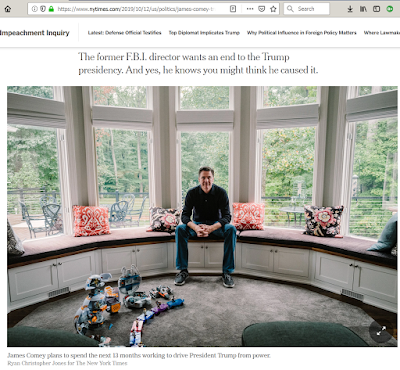 Curious as to the announcement now.
Some will feel vindicated, or that the tide has turned.

We have all known for years that criminal activity took place, and that it was against the American Citizens' interests.   But this is a critical step in heading down the path most of my readers are likely to agree with, prosecution of those who worked hard to upsurp the Constitition of the USA, including the Bill of Rights, and to loop the USA into a higher state of control.

One of the casualties of the facade is General Flynn.    Is he above reproach in every aspect of everything he has done his whole life?   Probably not.   Who is?

But Flynn's conviction was based upon "he lied", although those conclusions were drawn because of the CIA/FBI Strzok and Page and their superiors created lies by inaccurately reporting testimony, leaving out key parts, and just adding additional comments.

This Thread Reader takes a bunch of tweets and combine them into an easier to read flow.

I have a slight suspicion that General Flynn could replace Pence as Trump 2020 running mate.   It would say a lot.

Also Papadopolous was set up by Brennan (primarily), and it looks like things are setting up to hang Brennan.   He is a pretty hate-able guy.

Will any of these guys take a fall for the others?   Not willingly, maybe with some mutual assured blackmail.....

Trump a match to Obama`s incompetence? The Nobel Peace Prize? Selling US uranium to the Russians? Fast and furious? Toppling Gaddhafi only to reinstall slavery in Libya? Single handedly causing the "migrant" wave to Europe? Benghazi? And above all, secretly financing and equipping ISIS in Syria? Nope, we`re definitely not there yet!

This entire episode is a classic case of Alinsky Projection at an extraordinary magnitude. These people are dangerously psychotic. Their continued acts of lies, slander, and libel are intentional and with malice in their goal to damage and cause harm to America both here and abroad. The Democrat and Media PAC’s campaign of hatred for America, Her President, and We “Citizens” is unhinged and borders a concerning level of schizophrenia with nonstop lies, misrepresentations, hatred, and false narratives at an unbelievable magnitude. I’ve heard it said that the “4th Estate has become the 5th Column”… and I am convinced that the Democrats/Liberals/Progressives of both sides, and their Media PACs, are the biggest threat to America, Her Safety, Her Security, Her Citizens, and Her Future.  Stay vigilant and choose wisely in 2020 my friends… our future depends on it. May God bless and keep us all...