They had a rash of this in October 1973 as Deep State Nixon was getting into deep shit, and Kissinger was given the Nobel Peace Prize also in October 1973.   See graphic below.

The satanists and the Deep state run in the same circles.

This odd "Bovine Mutilation" was big in the 1970s, and then it came back with a story from

Kind of funny how that happened immediately after the 6th GOP Presidential Debate
January 14, 2016,
where it was clear that Trump was everyone's target.
https://abcnews.go.com/Politics/video/view-recaps-3rd-gop-debate-34830316


The Harvey County Sheriff’s Office reported in October 1973 “two bodies of sexually mutilated cows this week. Deputy Sheriff Ernest Harris said the cows’ sex organs and udders had been cut off with what appeared to be a very sharp instrument.”
https://www.capitalpress.com/ag_sectors/livestock/recent-cattle-mutilations-bring-memories-of-s-attacks/article_9c7a8b05-2b95-5e13-a8ca-db189ea9aef6.html

Looks pretty connected to political stuff.   In October 1973 a bunch of big things were happening.
VP Spiro Agnew resigned after tax fraud, Watergate kicked off with Nixon firing the accuser, and KISSINGER was awarded a Noble Peace Prize.

Butler County was one of the hardest hit.     But what else is ascribed to Butler County. 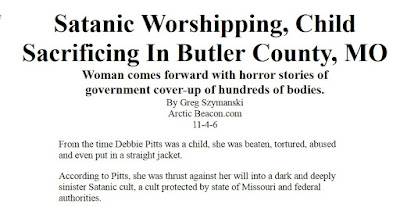 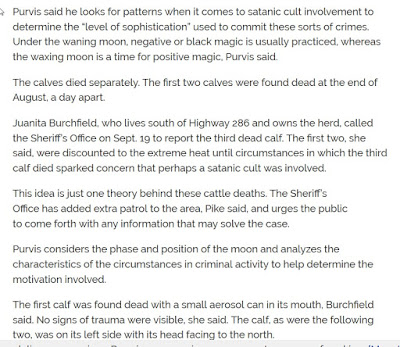 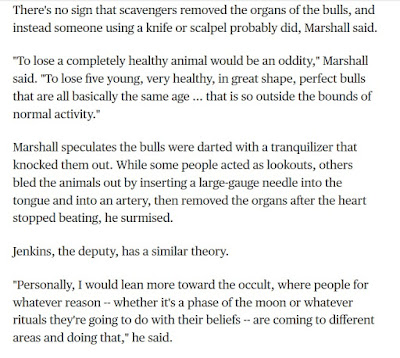 SALEM, Ore. — The first dead bull was found in a timbered ravine in eastern Oregon. There was no indication it had been shot, attacked by predators or eaten poisonous plants. The animal's sex organs and tongue had been removed. All the blood was gone.

In the next few days, four more Hereford bulls were found within 1.5 miles in the same condition. There were no tracks around the carcasses. Ranch management and law enforcement suspect that someone killed the bulls. Ranch hands have been advised to travel in pairs and to go armed.

No tracks, not even in soft ground.

Ever since the bulls were found over several days in July, Harney County Sheriff's Deputy Dan Jenkins has received many calls and emails from people speculating what, or who, might be responsible.
Posted by Stock at 5:43 PM