Ancient Super Tree, Buried and Preserved 41,000 Years Ago Has A Record Of A Magnetic Pole Flip 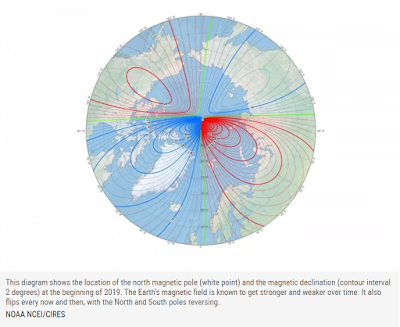 stock here--- Interesting article, but I had to chime in with a few thoughts


Great find, and a few clarifications.

Quiet sun does not let more sun energy or radiation in.
It does compress the earths magnetic shield allowing more cosmic rays in.

This nucleates clouds and creates cooling
It also nucleates magmatic gases causing more earthquakes and vulcanism, creates atmospherics particles and gases, that do a double whammy on cooling.

I am the discover of this combined phenomenom.   stock out.

Oh, and reversals can happen really fast, I mean look at the last 30 years.   A full reversal, or even a serious excursion could happen in just a handful of 22 year solar cycles.

Oh, my other epiphany, in that 41,000 year ago reversal, think great increase in GCR, cosmic rays, radiation, mutations, some die offs, and the first really awesome cave art......yep, a successful mutation that launched some human tribes into a new era of creativity and maybe intelligence too.

stock here, again.   As always, NOAA gets it wrong, I have a friend who works there and he says it is overflowing with lefties that hate Trump.    I am amused as to why this administration allows NOAA to continue on with "Climate Change Propaganda.   And one example I want to write a story on is all the foolishness on "The Warmest Ever" and their intentionally false charts that show "everything is so hot" when then real plots show much more cool area, and much less heat.   There should be a penalty for that, and I am surprised this administration doesn't reign them in.

A main precept of the Globalist attemped full takeover, is to get people emotional and scared, like little Greta, and then take their money and rights.    NOAA is feeding directly into this.

So in this NOAA example, they have 2 gaff's, in different highlights.

The NOAA said the WMM is used by the military, NASA, the Federal Aviation Administration and the U.S. Forest Service for mapping, navigation, and air traffic management. It is also used by smartphone providers for GPS, maps and compass apps. The military uses the WMM for undersea and aircraft navigation, parachute deployment, and more. Other governmental organizations, such as NASA, the Federal Aviation Administration, U.S. Forest Service, and many more use this technology for surveying and mapping, satellite/antenna tracking, and air traffic management.

The NOAA said Earth's magnetic field changes because of "unpredictable flows in Earth's core. The north polar region is experiencing one of these erratic changes."

1) They think that magnetic excursion are unpredictable.    Oh so scary, we know nothing of this planet we live on, and we will just make shit up as it goes along.....  The issue is not that it is unpredictable, just that there are not any good predictive methods for when and degree of excursion, but myself and other citizen scientists are working on it.

It can very well be driven by the 22 year Heliophysics cycle, of Quiet Sun, and related Galactic Cosmic Rays and vulcanism and magma flow.

2) Talking about just the north polar region, and not simultaneously mentioning the the South pole is also going on a little walkabout....is, just, irresponsible.