Be Prepared to Adapt! Do Not Fall For the Globalist Lies and Plans About "Climate"

Executive Summary: Be prepared to adapt to changing weather and climate.   The Globalist narrative is completely wrong, and exactly the opposite of what we need to spend our time and money on.

The complete lies about climate change are a crime against humanity.    They are not JUST trying to wrest power, wealth, control over energy and exert Globalist control over sovereign nation.....by their lies they are preventing people from perhaps taking on a very important task that does not happen overnight....be ready, be prepared for changes in weather and even "climate" that could last decades, be prepared for more severe weather events.   Be prepared to defend yourself against those who are unprepared.

So I have been meaning to write this article, really for years.

Instead I have been using time to make myself prepared.    A larger greenhouse, making sure that all of my tools and assets are in useable condition, a covered storage in an area patrolled by dogs where equipment can be secured.   Multiple heaters and heat sources.    Solar electric system (final hookup next Tuesday) and soon, battery backup.   And a hundred other things.

Note to self:  Buy backup well water pump and keep on shelf.

Quiet sun causes these events, not because the sun energy is less, because the lack of energetic sun magnetism affects earth's magnetic shield and allows more Galactic Cosmic Rays in to our layers of the atmosphere and earth itself.   This nucleates more clouds, which reflect sunlight, and reduces temperature. 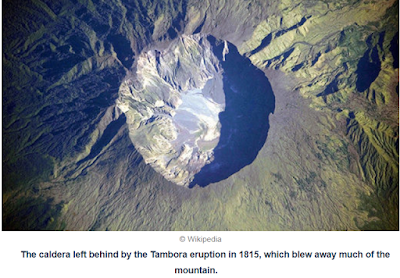 And this next doosey is my own scientific discovery --- along with global cooling, you also get
increased volcanic activity, which results in atmospheric particle and gases, and results in a double whammy of cooling.     Is there any "proof" of this?

Sure, whilst observation the 2018 Hawaiian Volcanic Event I noticed that all the big eruptions happened in the wee hours of the morning, after the Magma had been primed all day while faced the sun and the compressed magnetic field.

Then today, I correlated The 1815 Tambora Eruption with the second leg of the Dalton Minimum (A Quiet Sun Period starting right around 1800)

I'll do a whole story on those, I have an awesome data set on historical volcanic events and have plotted them and ran stats, and used some moving average work that clearly shows a roughly 20 to 24 year cycle of volcanic activity.      22 years is the true "cycle" of the sun magnetism.    Sunspots come and go on an 11 year term, but there is also a magnetic pole flip from North to South every 11 years, and then back South to North, 22 years.

Big Duh, the sun drives volcanos.    That work is not quite ready for prime time.

So I saw the story below, and it looks well researched on the "Little Ice Age"

Many of us think of today's extraordinarily rapid, human-caused climate change as an existential threat to humanity, one that will inevitably wipe away cities, industries, countries, perhaps even our species - or at least our way of life. Many historians, archaeologists and natural scientists have thought about the modest, natural climate changes that preceded the 20th century in much the same way: as existential threats to past civilisations. In their accounts, communities and societies wedded to old ways of life had little recourse when previously predictable weather patterns abruptly changed. Time and again, they argue, past climate changes provoked civilisational 'collapse': a sudden unravelling of social and economic complexity, culminating in a catastrophic decline in population. In popular books and articles, journalists and scientists draw on these ideas to argue that because natural climate changes destroyed past civilisations, anthropogenic warming could well doom ours.

Yet new research is telling us something very different. It is revealing that many - perhaps most - communities successfully endured past climate changes. Some bounced back quickly after severe and previously unusual weather; others avoided disaster entirely. Many adapted to become more resilient to damage, or to exploit new opportunities. Climate change in fact repeatedly altered environments so they better suited how some societies grew food, made money, or waged war.
Posted by Stock at 11:45 AM