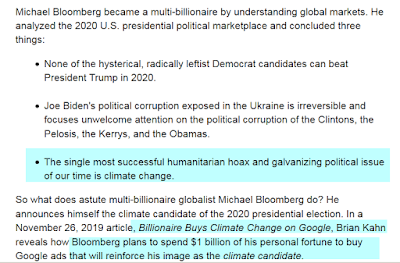 It is clear that after dozens of failed attempts to "Get Trump" a final emotive strategy is emerging.

Scare people into submission, you will either vote for us, or you will be effectively just murdering your own children, via "climate".    And how dare you even have children!

This story is kind of about Michael Bloomberg.    Biden was never a candidate, he was bait to try to get Trump to attack him too hard.   All the rest of the candidates are pretty much jokes, zero chance.    Not even good enough to entice the "reluctant" Hillary or Michelle to enter the race to save "our democracy".

And I think that is the plot.    Now position an old white guy (Bloomberg) to not just create a target for the Dems to position their chosen one (Michelle Obama) against, but also to push the narrative of climate change.    Look at all the Greta non-sense.

In the quote below, they not just miss the causative effect, that error can lend credibility to the lie that the Globalists push....that solar irradiance varies so little, that it is not necessary or allowable to factor the sun into any climate models.


The last time the sun’s power was as low as now, Scotland saw the bitter 2009-10 winter, Britain’s coldest winter since the 1970s, and the 2010 Big Freeze, with the coldest December ever recorded.

They also toss out their own "fear" about "if solar activity returns to normal in the next few years...."

Of course it will, the magnetics are already setting up as a "tell".   The real question is whether the next low part of the solar cycle (low sun spots and especially highly convoluted mixed magnetics) will also be low, super low, and will we go through another Maunder minimum, or Dalton.

There is a boat load of climate data on Nukepro.    Do a simple search.

Here is a great video, in less than 12 minutes, you can understand the financials behind the Climate Hoax.