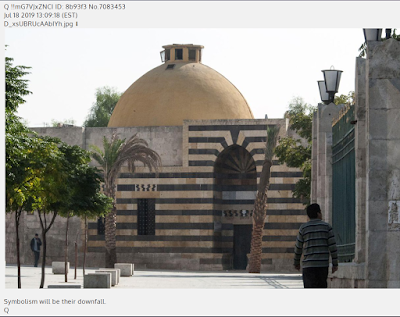 Saw this prior and never did a story, here it is quick and dirty.

I wonder who else had a temple that looked like that?    See below, Epstein and the Mamluks.

And the "guardians" of free speech, ABC news, tried to pretend that the "temple" was not really a temple, but a "gym".

ABC also trying to peddle / downplay what really happened on that island to just "naked young women".   Oh My God "They were topless"

Ya right, a gym which oddly had bloody mattresses in it as shown by drone footage.

Who Are The Mamluks?

Mamlūks, also spelled Mameluke, were a class of people, mostly of Turkic or Caucasian Arabic word meaning slave which actually comes from the 10th century AD. They were known as the ones that defeated the Mongols and the Crusaders and established a dynasty that lasted hundreds of years. 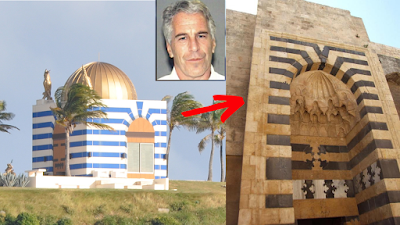 ethnicity, who served as slave soldiers between the 13th and 16th century in the Islamic world spanning from Egypt to Syria. The name Mameluke is derived from an
There are 2 distinct periods during the Mamluk reigns. The first period saw the Bahri dynasty that ruled Egypt between 1250–1382 AD. This dynasty would import young slaves, mainly Qipchak Turks from Central Asia and groom them to be warriors. They were more in common with the Mongols than with the peoples of Egypt and Syria among whom they lived with, while making sure they did not mix with the locals.
The second period saw the rise of the Burji Circassian dynasty which ruled from 1382-1517 AD. The Circassian Mamluks were white slaves that were taken from the northern Caucasus mountains and traded in slave markets. They were captured in their early childhood, usually around 13 years of age, by the sultans who raised them in special military camps to become soldiers for the ruling class. Many of the sultans were of Circassian origin themselves and were acquired as slaves by previous sultans. These Circassians converted to Islam and became freed after rising within the ranks of the military by proving their loyalty. This is the period that is relevant to this report, so let’s explore further.