I watched much of the Charade today.

Clearly, when she threw down the "Russia meddled in the 2016 election" she was at that point, totally outed as a Leftist activist.   And at that point, she could still tell some truths, but everything must be looked at closely.

She also played the "crazy conspiracy theory" on the TRUE CALL that the prior really corrupt actors in the Ukraine, did indeed their best to tilt the election to Hillary.    Although there is no doubt that Manafort is a snaky creature, they made up lies about him and further entrapped him to cast the whole Trump campaign into suspicion. 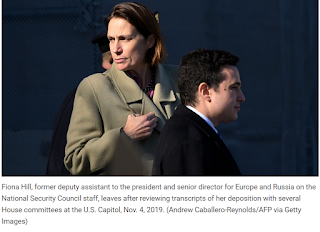 Fiona Hill represents herself well, even though I knew she was lying and slanting.

A Dem interviewer asked her about a prior report that she was a Leftist Globalist Soros Tool.

And she laughed and said something to dismiss those outright.     And then did "deflection
acceptance", my definition of a type of false argument, by stating "well the leftist part maybe ok, but British and American left are also different".....

Is it just me, but is that British accent, after spending a lifetime in USA politics, just way effing annoying?

This Wiki was updated with today's testimony, just 2 minutes after the "testimony" ended.    It is funny how she referred to herself as a "fact witness".

She also ran the "Center on United States and Europe" at  Brookings Institute, which studies government, and has an annual revenue of $117M

At the bottom of the Wiki article is their 2017 report.....everything I saw looks very LEFTY to me, even they claim to be non partisian.....just like all those "career civil servant" who always get thanked for their service, and it is always pointed out how they served under both democrats and republicans as if that make them super heroes that can avoid taking any political stance.....SHEESH.....

1) The last 20 years of Presidents, whether Dem or Rep, are basically all on the same "team" that of the corrupt and Globalists.
2) They wanted to keep their cushy jobs.

In their 2017 report they promote Agenda 2030, 17 non-achievable strategies of the Globalists.

They also are still pimping out the Paris Climate Agreement, and promoting carbon tax.

Their largest donors are "Steve and Roberta Denning" dyed in the wool Democrats, Hubby runs a $20B hedge fund which is worldwide, Roberta teaches finance at Ivy league.

Bill and Melinda Gates Foundation -- uh, yeah, we know what they are, Vax pushing Globalists.

The Hutchins Family Foundation -- Their central task is running the Center for American Progress, a total Globalist propaganda machine.

JP Morgan Chase -- oh sure, who could accuse them of being Globalist, LOL

Embassy of the State of Qatar --  I guess they got money to throw around.