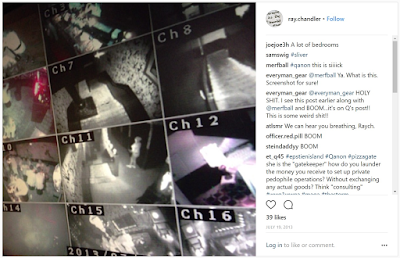 Some one or group killed this story.  They need to be identified.

Just what were they doing on that island?    More than just sex and blackmail.

This image from Rachel Chandler's phone, disturbing at best?

She posed as a photographer, of young distressed children, in sexual provocative poses and dress or states of underdress.    They were getting so carried away, that she openly advertised this on pinterest and other places.


“If you solicited a 14-year-old for prostitution, you’re a pedophile.
You’re procuring an underage girl for sex. That’s what he was convicted of. I’m sorry, I’m sorry, with respect, that is nonsense.”

Campbell then immediately attempted to backpedal, claiming that a distinction must be made between a minor and a child.


“Was he? 14? Well, I’m not justifying Jeffrey Epstein. Pedophilia, I suspect there’s a difference between a minor and a child,” she said.
“A 14-year-old is a child. Legally, she’s a child,” Morgan replied.