Shifting the Narrative, Moving the Goal Posts -- As Positions Are Shown Untenable -- Media Is Used for More Pretense on "Cancel Culture"

Calling the memes out of the gate.

I first saw this article on "Cancel Culture", which in my perspective, is the shouting down of anyone who's opinion the left doesn't like or tolerate. The essence of intolerance.

This has been happening many places, but most notably at American universities.

So when I saw "cancel culture" described as gorgeously messy, I intuited a new narrative being played.   That article on leftist Mashable is HERE

Let's go to the bottom line immediately.
They pretend that cancel culture is having someone be criticized by multiple parties, and that it is primarily "OK" because it is often on "social media" 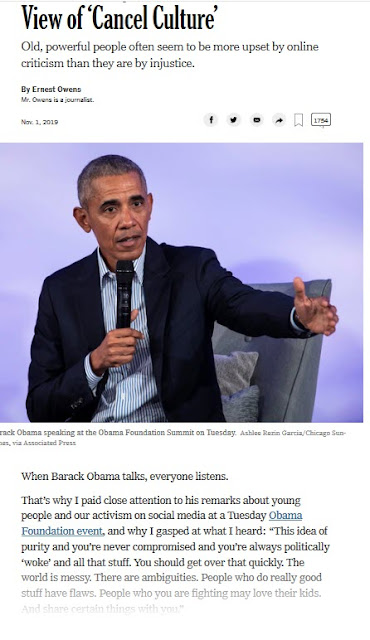 is portrayed as a "boomer" with a distorted view of why University students are so distorted....well read it yourself, LOL.

As a millennial who has participated in using digital platforms to critique powerful people for promoting bigotry or harming others, I can assure you it wasn’t because they had “different opinions.”

It is stunning that these "woke" cannot see that their own failings are exactly what they are trying to project onto others.  I say stunning, 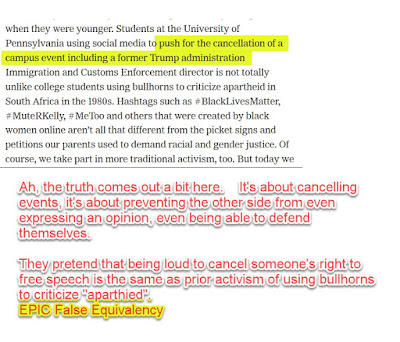 because many really believe it.  It is not just because they are trying to push the "dissatisfaction everywhere, conflict and division everywhere" Globalist meme....they have bought it hook line and sinker.

I guess that it is true that they have been "marginalized", by the liberal educational system that has been taken over in the K12 to the "highest levels".

Also a new meme from this article "Gender Justice"

In multiple articles, the Globalists, who were themselves using many of the celebrities in question, as part of their mutual assured blackmail and political control via sexual hijinks.....bring up Harvey Weinstein, and because many criticised him on social media (their pretend version of Cancel Culture) that their "movement" now holds all higher moral ground.

Well, the best lies contain an element of the truth.  Weinstein was and is a pig of a man.   But it wasn't the "woke" that called him out in the first place.   Said woke were often other women who recruited young actresses and encouraged them to be Weinsteins "Toys".

Then another game they play.....we are not sure it even works, therefore boomers should be concerned with us using it.   Again, lets focus on the real process of cancel culture....to silence voices so that the controlled media narrative can be nearly unopposed.  About 2/3rds down on the article. 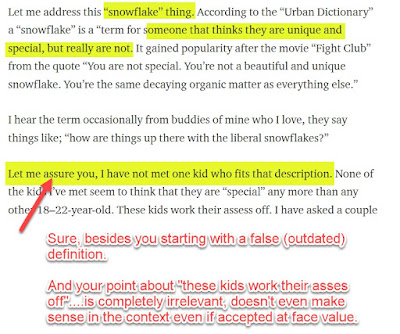 stock post script, whilst closing out
my Firefox windows, I noted the story that really got me going on
this article.

They also shift the narrative by using an Urban dictionary, old, definition of "snowflake". 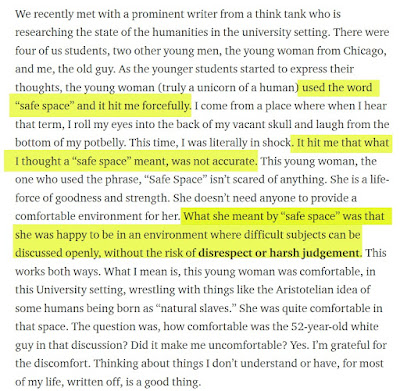 A Snowflake is a delicate little unicorn that can't accept the slightest criticism, that can't even STAND hearing something that conflicts with their programmed liberal
world view.   A snowflake needs a "safe space" where they can cuddle with a fluffy animal.

Ah, and now Medium will use a "slow" old veteran to reframe the Safespace.

Read the graphic to see it.

And then he plays the "I am the slow old white guy" who is "uncomfortable" talking about the writings of classic writers.