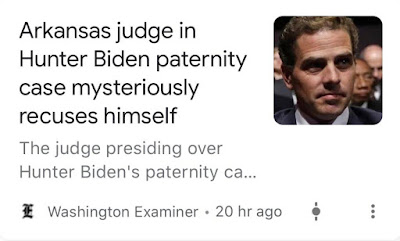 Does anyone think it a bit suspicious that the Judge presiding over Robert Hunter Biden's Paternity
case, has recused himself (left the case)?

Hmmm....kind of like the prosecutor that Joe Biden got fired by threat of witholding of funds to Ukraine....when that prosecutor was under active investigation of Burrisma, the company that was funneling Millions of dollars to Hunter Biden and his college Buddy "Archer".

And this case is in Arkansaw, the home of the Clinton Body Count.    His name was Seth Rich.....

Hunter left his first wife Kathleen — the mother of his three daughters — in 2016 after 22 years of marriage and moved in with Hallie Biden, the widow of his elder brother Beau, who died from brain cancer the previous year.

In the divorce, his wife claimed he had spent ‘extravagantly on his own interests (including drugs, alcohol, prostitutes, strip clubs and gifts for women with whom he has sexual relations), while leaving the family with no funds to pay legitimate bills.’