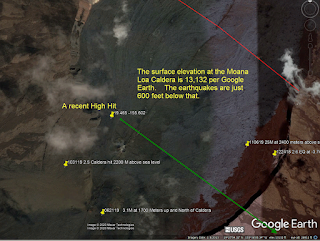 Let's start with the exciting end game.    It sure looks like Moana Loa is about to blow.
And I invented a way to map the Magma Chambers of Moana Loa, it's below.

Amazingly, later that day, the Chief Scientist at Moana Loa, put out a YouTube video discussing the Big Island volcanic systems and the chance for more activity.   She completely ignored the Large High Hits on Moana Loa.    I think they wanted to show that they "pre-warned" so that no one can later attack them for negligence, like when the town of Kona is wiped out.

I was always somewhat skeptical of the everywhere accepted Tectonic Plate theory, especially when they show land masses curling down so vertically.   But once I started studying deep earthquakes, it became obvious that at some depth, there were no more earthquakes....you can't have earthquakes in liquid (OK call it a thixotropic fluid).

So then I intended to apply this to magma chambers to "map" them.    In particular, their shape, their feeder ports and tubes and slots, and their exposure to Galactic Cosmic Rays which can nucleate their dissolved gases.

But really it took over a year to come up with any decent way of 3D mapping.    But it was not "instructive", it was too messy.   They make awesome video presentations of changes and events over time, but they are too messy to identify magma chambers.

So I had an epiphany, kind of counter intuitive.....   Use the same data, but slice it into 2D and look at it from different angles too.  That is below in the dark plots.    A future project will be to parse the data into a view from 45 degrees between Latitude and Longitude, using some type of Cartesian coordinate system manipulation.   Wish me luck on that one, LOL. 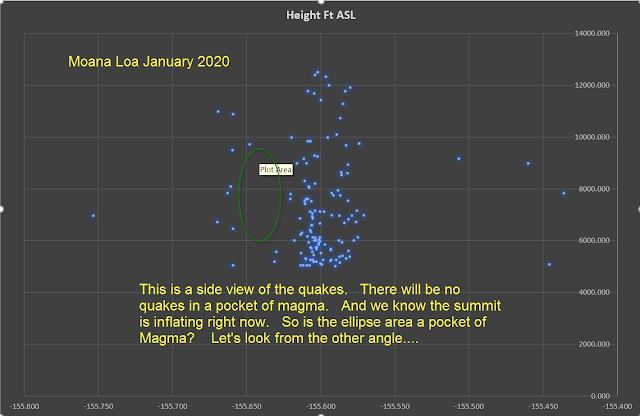 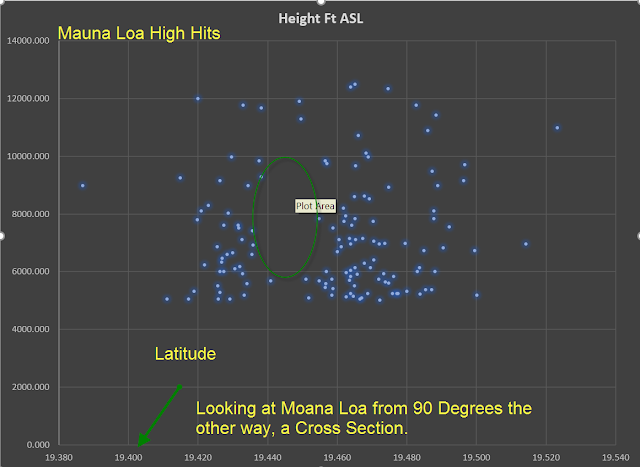