Important Elements Of Climate Variation -- One Does Not "Fight Climate" and Win, One Adjusts to Climate and Weather

In response to a Denier Shouter at ABC, I had this. 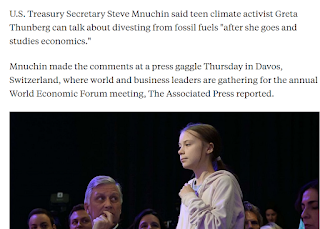 Not at all a dodge, I am an expert in heliophysics, magnetic excursions, galactic cosmic rays, grand solar minimums, ice cores and other reconstructions, maunder minimum,, Dalton minimum.    I think there could be some small impact(of 'carbon'), like 2% of total warming.

Are all much more important.

Climate "scientists" aka Grant Whores, on their high moral ground have been caught fudging almost every "climate" metric that there is.....because the end result is so important.

We were lucky to live in the modern warm period after de-glaciating out of the little ice age.    The next 20 and 40 years should see cooling and famine, regime changes, and a serious bitch slapping to countries that invested in carbon extraction idiocy.

We absolutely need to stop pollution, excessive use of pesticides and herbicides which can be greatly reduced if we just improve our soils and forest management.     Reduction of glyphosate will also improve water quality a lot  (it turns into phosphate among other things).   And no, having a penis up your rectum is not "an advancement in human rights and dignity"

Greta "we cannot care about criticism" and still do what we do.    In other words, we cannot even consider any other statement or argument, because we hold the high moral ground as the true believers.

Greta: "Entire ecosystems are dying" She is correct.

The Greta Pacific Die Off (post Fukushima) and The Great Bug Die Off of 90%.    Bad signs.

Unhealthy soils that act like Zombie soil that only produce when dosed with chemical fertilizers, Genetically modified seeds that can't even self re-produce.

Then they must be blasted with deadly toxins that

1) wipe out insects including bees,
2) cause asthma and other respiratory problems,
3) cause cancers and other morbidity,
4) and finally when they decompose they enter our waterways as phosphate and they grow and overgrow algae that are now often toxic themselves.