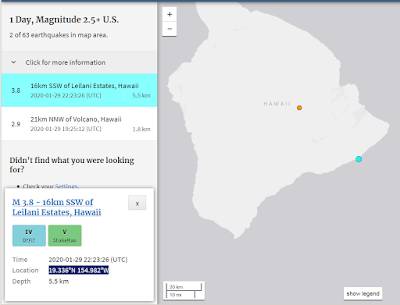 I follow this enough that I knew the location of yesterday's large earthquake....the location looked suspiciously like the 2018 Trigger.   So plotted on Google Earth, and yes indeed it was.

You can right click and open these graphics in a new window and they are much more readable.

It's offshore from Kalapana.   On the USGS they label it as Leilani Estates. 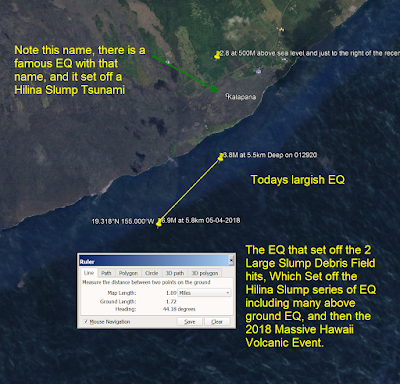 Back in  1975 there was the Kalapana Earthquake, it was large, and triggered a tsunami that made it to Japan and California.   It only killed 2 people on the big island, it was very sparsely populated at the time.   A dozen residences total in a 20 mile span, 10 miles each way from the epicenter.   Not so now.


It hit Oahu at 1 foot, 30 minutes later.    Oahu is exactly the opposite direction from this shoreline, so is partly protected, much a much larger tsunami may not work the same.    Los Angeles also saw a 1 foot tsunami, 6 hours later, or 350MPH wave speed.

Some report the local wave at 45', others say it was at the top of the coconut trees, more like 60 feet. 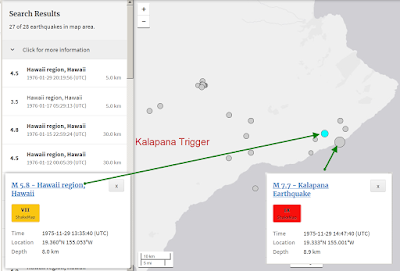 The 2018 Trigger off Kalapana also set off 2 large quakes right in the Underwater Slump Field (SF),
the remnants of prior Slump events.    It destabilized the SF, which allowed movement on the above ground Hilina slump, which is clearly shown in this video I created that just shows above sea level EQ, you won't see the Slump Field quake on this as they are underwater.   I'll do another one showing those  SF EQ. 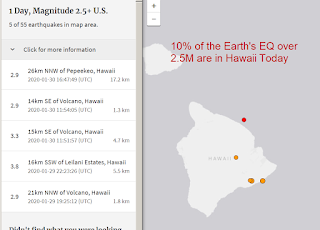 Note in the 2019 HVE most of the last minute forced evacuations were in the wee hours of the morning. 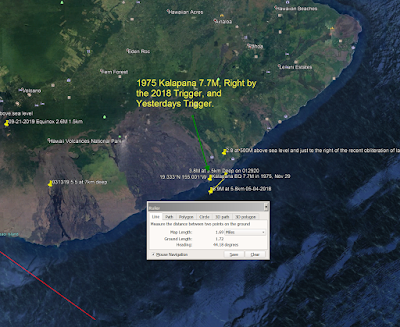 The largest evacuation came the early morning of the day after the day that I formed my theory of GCR nucleation of gasses, and actually called the USGS and Mayor Kim and warned then of a possible large eruption and east riff activity.

See Graphic, All three Triggers are within a mile. 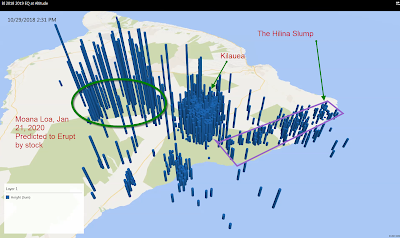 The first is all above sea level EQ and it clearly shows the Hilina Slump get hit hard (think Kalapana area) and then that triggers the whole HVE of 2018.

The second video shows ALL earthquakes of 2018 into 2019: Notables.