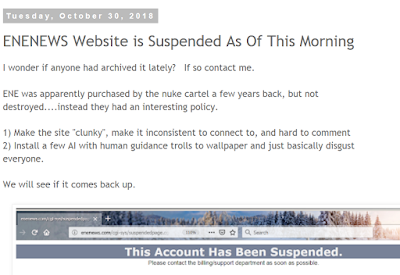 Both have been bought out and Zombiefied

Enenews was an amazing site, talking about Fukushima, and one by one exposing the lies of the nuclear industry and their pimps that profit from them.      Clearly, it was bought out by the nuclear industry and then ran for a while, even with the original webmaster writing some of the articles.   It was controlled opposition that kept people there, kept them from becoming more effective whilst jumping ship to another site or organization that would really get something done.

Then one day, after most of the zeal was gone, and the infighting had become rampant, and a left versus right war was simmering always....they want us all divided.....it just went blank.

Another story about the Zombification of ENENEWS

Zerohedge has been getting more and more shaky for maybe 1.5 years.   Lots of stories that I plain disagree with.

Several times they have pimped for the Nuclear Cartel.    But today's was over the top, a 2 part story, with the first part concluding that

If we want the system to be largely CO2-free, then the only available option is nuclear energy.

It is kind of painful to read, they do have elements of the truth, as does the best lies.


All that used fuel can be stored safely.  In the US we have already built a safe storage system at Yucca mt. but the enviro nazis won't let us use it.  The goal is to destroy human life on earth except for the elite.  If you knew a little about nuclear power you would not believe the disinformation put out about Fukushima.  There is a well funded world wide effort to destroy all useful energy sources because that would destroy our ability to feed clothe and house the current population.  Death is what they want and people like you are cheering them on.


Your ignorance regarding nuclear energy is astounding.  Leaving the plants empty and running for 3 days, you would notice nothing.  At worst a few would shut down themselves if something went wrong.  Ignorant fools like yourself should really just shut up.


One of my greatest disappointments in the human race is the failure of improved science, technology and communications capabilities to enlighten us in sufficient numbers to achieve critical mass, enabling us to arrive at common truths and to be able to act upon them in unison to our collective benefit.

Instead, we are plagued by our inability to sift through propaganda and discard our biases, leaving us to substitute 'emotion' for 'logic,' and thus dispersing our personal energies to the ethers, to no one's benefit except to those who control us.

We have trapped ourselves in a vicious cycle with no visible path from which to emerge. If we could achieve 'escape velocity,' as humans, the experience would be truly transcedental.

Largely correct. We have invested massive amounts of intellectual effort in science and practically zero in our humanity. Werner Erhard gave it a good try.

I suspect the so called dark ages may look dark because we are looking for scientific or economic progress and they were more interested in spirituality and humanities?