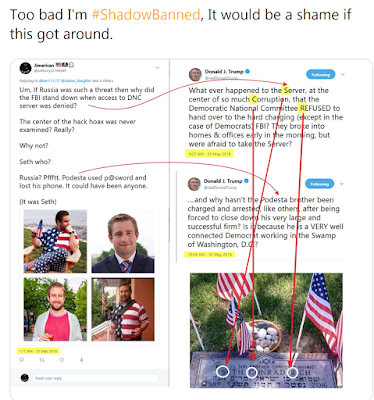 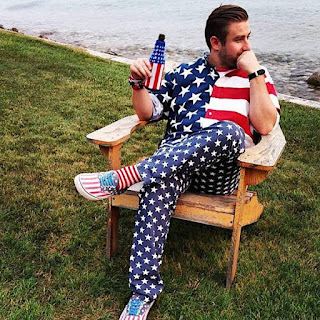 Added some material at the far end, more info on Brazille and Shultz, and how his injuries were treatable and he should not have died. Added more material from VOAT, a plethora of connections.   Crowdstrike is important.   At far bottom. He was 27 YO.

ON Feb 1 2020, Craig Murray did a further writeup, link below.   More analysis on why the family did not want to pursue further. 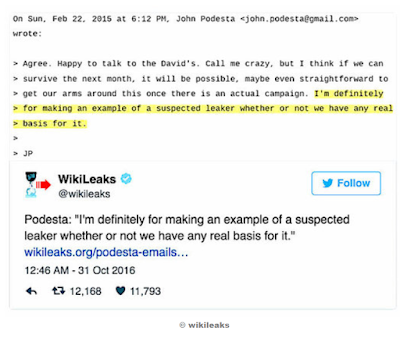 This is all from email release which is a 5MB file that you can download here:


First off let's introduce a "Deep State" site, with pictures of the "actors"

Note how many are part of the Clinton Foundation.   A way to reward their bad behavior.

A set of players took active measures to not just Kill Seth Rich  but to Kill the Seth Rich Story.

Seth Rich was a DNC staffer, he was a Bernie guy.    He saw how they were stealing any chance of a Caucus vote for Bernie.   Although a Democrat, Seth was also a great patriot. 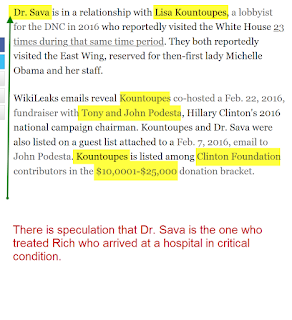 So he decided to blow the DNC Bernie hit job, wide open, by releasing a bunch of DNC emails.

Seth Rich gave the emails to Wikileaks, which Wikileaks acknowledged (hedging because they never release their sources).

The data files on these emails shows the date and time that the files were created on the Thumbdrive.   Why do we know it was a Thumbdrive?   Because of the size of the files and the then related time stamp, we know the transfer rate.

The only way to transfer as fast as they did is with a Thumbdrive plugged directly into the host computer.

Do you get it already?

Russia could not have hacked in and got the emails, and transferred and created the files as quickly as the real data shows.     Russia didn't do it.  It was an inside job.

They killed Seth Rich.   They attempted to make it look like a botched robbery, but nothing was stolen.    He didn't die right away.

On July 22, Wikileaks released 20,000 emails proving that the DNC conspired to sabotage Bernie Sanders, leading to the resignation of Debbie Wasserman Schulz.

On August 10th, 2016 Peter Strzok discusses how the Seth Rich story was "Squashed" by the FBI.

On August 11, 2016 Strzok, Page, a Deep Staters from the FBI David Archey (Richmond Virginia) and Charles Mcgonigal (New York) discuss how they must have an in person only meeting.

Also involved all these discussions at the FBI re Seth Rich, was Jonathon Moffa.  He is a huge player who amazingly has escaped much of the lime light. 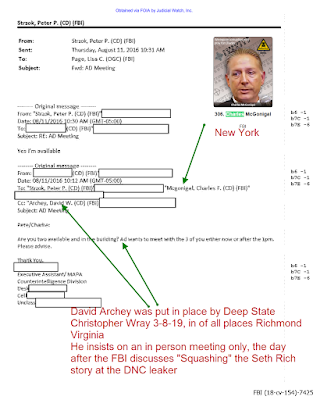 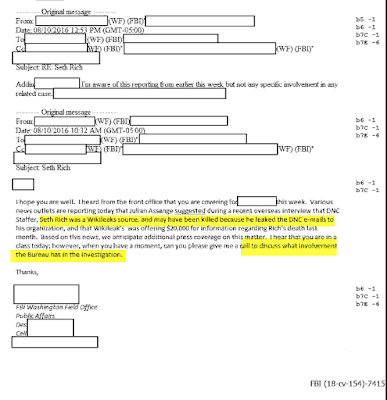 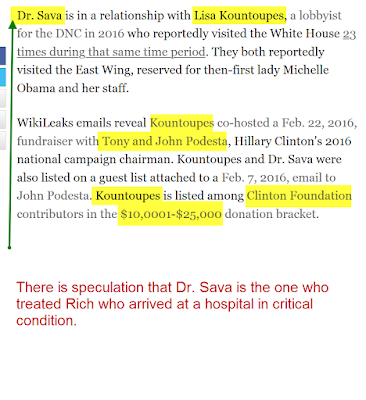 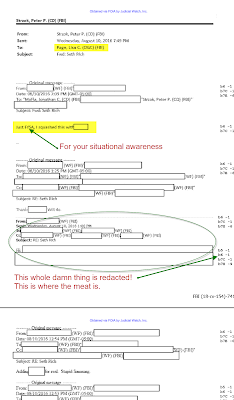 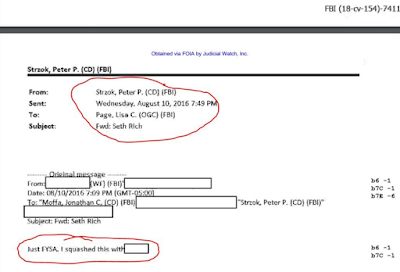 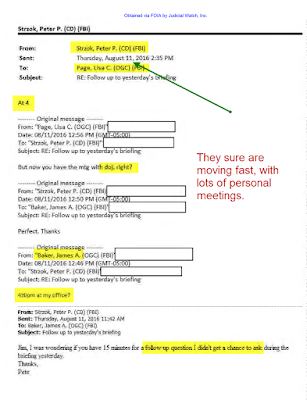 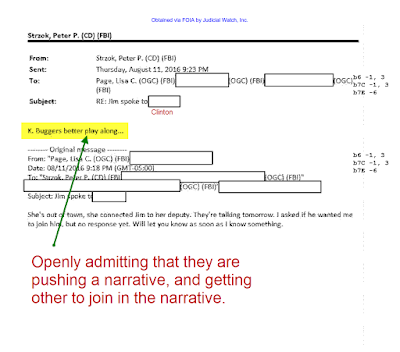 His brother did say that first responders found him as talkative at the scene, and very conscious but confused and gave his address as a prior address.   It was 4 AM after bar time, LOL.

He made it to the hospital alive, and there is a report from one Doctor at said hospital that he definitely looked like his injuries were treatable and should not have been a concern.

Reportedly Donna Brazille (who acted like his friend and maybe really was....but when the Deep State gives you orders under threat of exposing your felony level blackmail, she kills him anyway) visits, almost at same time as he gets to hospital, which is only like 6 minutes from 1st response.

Please advise on who was not allowed to visit him.

Do you know for sure which Hospital it was?   Someone else important was taken to same hospital.

Seth Rich's former boss and co-boss are Donna Brazile and Debbie Wasserman-Shultz.
Both of who are directly linked to Imran Awan. Mr Awan is the greatest living hero of the Pakistan's war on the Imperialistic evil Obama worshiping Nation we call USA.

Imran is a Demi-God to our self admitted enemies and is walking free to Blackmail Congress on behalf of the grateful Nation of Pakistan.

I am not feeling grateful to perversion of Justice.

Just because a Jew wrote it does not mean it's all lies. Learn to filter or die of ignorance.
Beside they have to include truth once in a while because the narrative will crumble.


Show Your Support To WikiLeaks


Seth Rich Was A Hero

Bill Binney States that the NSA Has 32 Pages of Communications Between Seth Rich and Julian Assange, As Revealed by a FOIA
Mark F. McCarty
Apr 19 [2017]
About six months ago, a blogpost by “Publius Tacitus” appeared regarding attorney Ty Clevenger’s FOIA request regarding Seth Rich:
“But now there is new information that may corroborate what the human sources quoted in the Fox article claimed about Seth’s role in getting the DNC documents to Wikileaks. Borne from a FOIA request filed in November 2017 by attorney Ty Clevenger, who requested any information regarding Seth Rich and Julian Assange. The NSA informed Clevenger in a letter dated 4 October 2018 that:
Your request has been processed under the provisions of the FOIA. Fifteen documents (32 pages) responsive to your request have been reviewed by this Agency as required by the FOIA and have found to be currently and properly classified in accordance with Executive Order 13526. These documents meet the criteria for classification as set forth in Subparagraph © of Section 1.4 and remains classified TOP SECRET and SECRET.
If NSA had come back and said, “No, we do not have anything pertaining to Seth Rich,” that would have been news. It would have been especially unwelcome news for those who believe that Seth was the source on the DNC emails. But now the opposite is true. The NSA says that it has documents that are classified TS and S. What do those documents say or prove? That remains to be seen.”
At the time this appeared, I felt that it was of high significance, but I wasn’t quite sure what it meant. What is meant by “any information regarding Julian Assange and Seth Rich?” Reports generated within the NSA that mention both? Communications in which either mentions the other? Direct communications between the two? What was the actual language of Clevenger’s request?
The final sentence of the blogpost seems to muddy the waters even more:
Eighth, the NSA has confirmed that it has Top Secret and Secret documents responsive to a FOIA request for information concerning contact between Seth Rich and other people including Julian Assange.
“And other people”?
Although I was somewhat confused by the meaning of this revelation, I commented on its significance. At the very least, it meant that the view that Seth was the source of the Wikileaks DNC releases was more than the brainless and callous conspiracy theory that mainstream media were making it out to be.
So Why Does the NSA Have 32 Pages of Secret/Top Secret Documents on Seth Rich?
Most people probably missed this intriguing blogpost by Publius Tacitus which appeared yesterday.:
medium.com
Fortunately, Bill Binney, one of the founding fathers of the NSA, and universally acknowledged to be one of the most brilliant people who ever worked for the U.S. government, has offered clarification on this issue in a brief interview with Ed Butowsky he gave two days ago.
In this interview, he offers a devastating rebuke of the fraudulence of the Mueller report’s analysis of “Russian hacking”. But the truly fascinating part occurs at about 6:40, where Binney discusses Clevenger’s FOIA request.
Here’s what Binney says:
“Ty Clevenger has FOIAed information from NSA asking for any data that involved both Seth Rich and also Julian Assange.
And they responded by saying we’ve got 15 files, 32 pages, but they’re all classified in accordance with executive order 13526 covering classification, and therefore you can’t have them.
That says that NSA has records of communications between Seth Rich and Julian Assange. I mean, that’s the only business that NSA is in — copying communications between people and devices.”
If Binney is interpreting this correctly — and bear in mind that, not only is he extraordinarily bright, but he is sometimes referred to as “the father of the NSA” — this provides strong support for the hypothesis that Seth was indeed Wikileaks’ source for the DNC emails it published. Assange has strongly hinted at this, Sy Hersh claims to have a trusted informant inside the FBI who states that he has seen FBI documents verifying this, and Binney himself says that he has two sources inside the intel community vouching for this.
(Go to the 8:30 mark — Binney inadvertantly refers to “Seth” when he means “Sy”.)
Beyond that, as Binney makes clear, the Mueller report’s tale of how Wikileaks received the DNC emails from GRU agents styling themselves as “Guccifer 2.0” is absurd on its face to reasonable people who will examine the pertinent evidence.
So let’s push to get the real story out. And, if it turns out that Binney is right, we’ll need to apologize to Russia, and then decide whom to send to prison for the rest of their miserable prevaricating lives.
PoliticsSeth RichBill BinneyFOIADNC
Go to the profile of Mark F. McCarty
Mark F. McCarty
Medium member since Aug 2017
Mark McCarty is a biomedical theoretician/applied nutritionist who occasionally dabbles in political writing when he becomes sufficiently appalled and terrified