Anon's Sometimes Ask About D5, Here is the Explanation 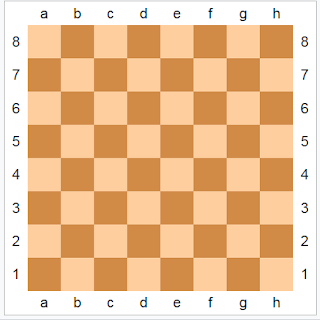 This is how the squares are labelled on a Chess Match / Board.    On the link below in purple, you can see the game played out step by step.

I found that at chess.com you can play against the computer, and you can set the board up exactly like this 1990 game in which the D5 move was essential.

But I backtested Black's move based on Black being the computer, and playing of levels of 4, 8, and 10.    4 is "kind of stupid" and 4 replicated the totally failed response in the 1990 of moving Black Rook to threaten a pawn.    When the computer played BR to D4, I beat them handily in any number of permutations.    When I upped the level to 8, Black did not play Rook to D4, but I was still able to at least beat or draw the game, the D5 move is that powerful!

When I upped the Computer level to 10 (expert) it was hard but I was only able to draw.    But that said, I played fairly fast, like 30 minutes to conclusion.


Beginners tend to focus on protecting their pieces on the board and their moves are just a succession of short term tactical arrangements while the experienced player focuses on optimizing his position and achieving an ownership of the chess board that will inevitably result in the death of the opponent’s king.
​
When the experienced player detects this focus on material, he turns it to his advantage and sets up traps that the greedy and short term sighted rookie would systematically fall into, until he dies with an aborted smile and a distended belly full of the well-packed junk that were graciously served to him.
​
So you want to know about D5? Watch this 1990 Wojtkiewicz vs Kuczynski game where Wojtkiewicz wins in 25 moves (the YT title is incorrect but the video is accurate) video
​
As you can see, the first major mistake Kaczynski playing black makes is his 14. a5 move. He allows Wojtkiewicz to take the pawn and is forced to lose time and make the Queen d8 extra move to get the material back.

In response, White, pretending to still care about his challenged pawn on a5 and to be interested in the b7 pawn, moves his Queen to b4 for (in fact) further positioning on e7.    For one, it just looks like a "Black Knight Pin" and then with WQ to E8 Check, the only defense is to block the check with BK to F8, again pinning the BK

At this moment of the game, the highly strategic D5 position is unveiled but Wojtkiewicz skillfully temporizes and while his Black is losing time focusing on material, White is focusing on position.

Blacks' next moves show he is not seeing the position coming, he protects his b7 pawn with Queen C7

Defeated by greed of being able to take one more Pawn, Black falls into the A4 pawn trap (Black doubles up rooks on the A line, pressuring the White A4 pawn,

which would require White to defend with the Queen, but then white would be "self pinned" into using her Queen and a rook to protect a lowly pawn.  Black then trades Rooks in order to take the A4 Pawn.    Move 21.

The Analyst "Serial Brain" had this to say....

This allows Wojtkiewicz to finally play the 22nd D5 deadly move which, at first glimpse does not seem to be bloody but in reality only offers to Kaczynski the bad or very bad options leading to his unavoidable defeat.

I disagree, I think that Black is just outplayed, and I agree greedy.   Rather than protecting Black King by opening up an escape route, via pawn to H6 (a defensive maneuver) Black focuses on trying to take pawns and create a "passed pawn" situation with it's pawn on the B column.

Rather than protect Black King......

From Chess.com, the setup just after the D5

This is PGN format 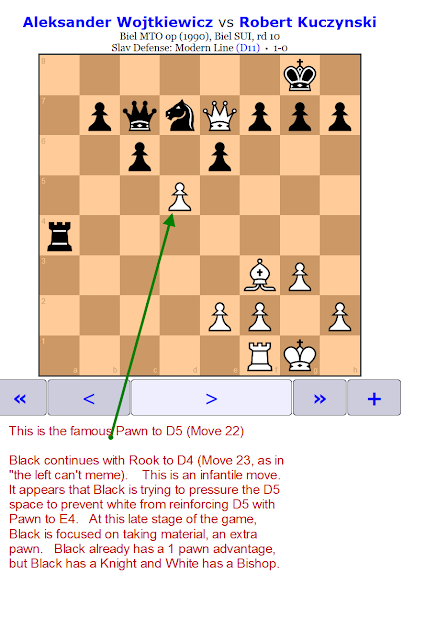