Japan Closing All Public Schools For A Month, And Asking All Private Schools to Close 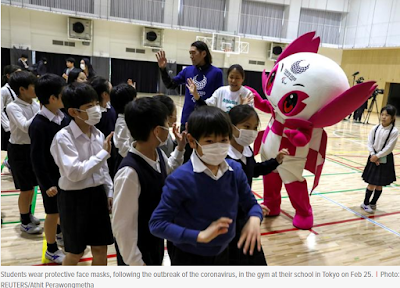 LOL he who panics first panics most effectively.    I bought the last remaining quality air filtration yesterday, at reasonable price  anyway.   N95 and N100 marketed for construction purposes, but they will work.

I was invited to, and attended the first anniversary of the new Emperor for Japan at the Japanese embassy in Chicago, and with new emperor comes also a new Era, the Rei Wa Era.   Hundreds of people there, many Japanese, LOL.    Then followed that up with a trip to the Shedd Aquarium the next day in Chicago.   It was Family Free Day, OMG, very crowded with thousands of rug rats scampering about, putting germs on everything.     Trick jumping Beluga Whales and more, LOL.

I felt my immune system was rock solid, but.....

Tuesday night I "got the Flu", and pounding zinc tablets, D3, C, and priobiotic pills and food.....kicked the hell out of the flu and felt 95% normal by Wednesday night.

20,000 people with flu in Wisconsin, some people taking 2 weeks to recover.     And on to Wisconsin.....when the Democratic National Convention was to be planted into Milwaukee, last year, I predicted at the time there would be several false flags and "real" false flags, and so it begins.

With the shooting deaths of 5+1 at an iconic location, and ridiculous police coverage, with even the polive from Chicago coming up to "investigate".     I mean sheesh, they guy killed himself at the scene.   But a media shitshow was "necessary".

That was 2PM Wednesday.    As of 10:15 AM Thursday, they have not released the name, race, or motivations of the shooter.    I guess "they" need that time to scrub the internet and social media of anything pointing to leftist leanings, and plant some stories into 8chan or 4Kun or whatever those sites are.     Thats a whole extra story I will cover.

MSM is pretty slow on the draw, amazing that they haven't seized this story to create more panic.

Also, many families have 2 working parents, so this throws a huge monkey wrench into things.

This seems like an extreme move, and I think it is mostly motivated by making sure that things are "good" prior to the Olympics.
Posted by Stock at 8:18 AM