Decision made by JP Cooney


Why isn't J.P. Cooney under investigation??   He is obviously a bad actor.

His real name is Joseph Patrick Cooney, which was amazingly hard to find even that.   You know the story of James Corney....spelling errors to make issues harder to research......

Cooney IS the section Chief of the Criminal Fraud and Public Corruption, Washington DC. 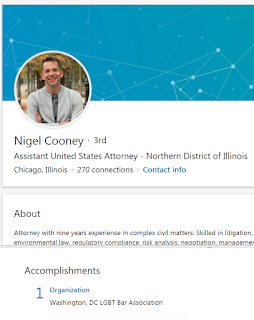 I pretty much think that Cooney is a CIA asset.   There is nothing on the web on this guy, except for some high profile cases.   There are no articles, no Wikipedia (I tried to make one), no images, no quotations.    He is a freaking spook.

He likes to go by J.P.
His linked in page is super sketchy

Is this a relative, US Attorney for Chicago?   No corruption there!


Until we remove these obvious bad actors, the necessary improvement cannot happen.....how do you eliminate Fraud in Government, when the Chief for Investigating the Fraud is part of the
Fraud, part of the deep state globalists.


Cooney was responsible for the plea deal for Imran Awan Aug 21, 2018.    Cooney was inserted into the Awan "matter" to replace the original prosecutor Michael Marando.

In the plea deal, even though he was guilty of horrendous crimes against the USA, including espinage of congress and selling state secrets, and stealing $2M of Government computer equipment....Cooney only required Awan to plead guilty to 1 count of bank fraud, and then he let him out of prison that day, on "time served".

Cooney is a ghost.     There is not a single picture of him on the internet, or the DOJ website.

And the DOJ has repeatedly failed to produce documents related to the Iwan's, even though under a lawsuit to do so.      This is still happening in real time.

“The cover-up of the Awan Brothers Democratic IT scandal shows the FBI and DOJ’s penchant for dishonesty isn’t just limited to FISA abuse,” stated Judicial Watch President Tom Fitton. “The DOJ’s handling of the Awan Brothers case has long been an issue of concern and now we are expected believe some secret investigation prevents the public from knowing the full truth about this scandal. We are skeptical.”
Imran Awan and his family were banned from the House computer network in February 2017 after the House’s top law enforcement officer wrote that Imran was “an ongoing and serious risk to the House of Representatives, possibly threatening the integrity of our information systems,” and that a server containing evidence had gone “missing.” The inspector general said server logs showed “unauthorized access” and procurement records were falsified.
Imran Awan was Rep. Debbie Wasserman Schultz’s (D-FL) top information technology aide. Most lawmakers fired Awan in February, but Wasserman Schultz kept him on until he was arrested in July 2017, trying to board a flight for Pakistan.

I like to read the WaPo, because it makes the left narrative so clear.    But they only give you a few articles....but you can clear the WaPo cache with this link....

Cooney prosecuted another case in which a man admitted taking bribes to allow $1M of equipment to be stolen from Marine Base.     But Iwan was accused of taking $2M of gov computer equipment and he stated that was "inconsequential".

hmmm.....double standards everywhere in the Swamp.