When you dig into things, some names just keep popping up.

1) Bush's Chief in the horrifically executed war on drugs.
2) Allowed slow investigation of McCabe, and then pushed for "Charge McCabe now or cancel the investigation"
3) Allowed the slow roll out of Strzok Page communications, while talking tough about it.
4) Presided over the IRS targeting Tea Party non-profits, hobbling them.     Talking strong, but no real positive results or punishments or real plans to prevent in the future (although it was a key talking point)
5) Chief FISA court judge starting in 2013 and presiding over the worst of the Obama administration abuse.
6) Suspicion that Brennan and Clapper had spied directly on Reggie Walton, and gained information to manipulate him with.    John Roberts also spied on.   And Comey in there to cover it up.

On Item 6, there is a few audio interviews with the insider who set up the early spying


And sometimes the same name is linked to multiply horrible, almost unfathomable decisions.

Other times, they simply show obstructionist tactics.    Slow production.   And excessive redacting, very intentionally done and without justification (well the justification is usually "protection of criminal actions and governmental fraud").

Introducing Judge Reggie B. Walton.    An original Bush appointee.   The start of the serious rollout of New World Order. 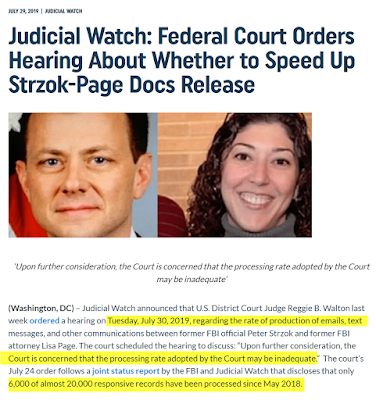 One of Reggie Walton's clerks had a personal relationship to the defense attorney for a case involving a high profile civil rape case of Tigers Pitcher Alfredo Simon.      The implications are that she took actions to sway the Judge's decision to the defense''s benefit.
https://abovethelaw.com/2015/10/law-clerk-busted-getting-chummy-with-lawyer-appearing-before-the-court/
They tried to get Walton to recuse himself, or to be removed from the case, and that failed.

Reggie Walton appears to talk strong, but in the end the results are usually nothing important.

Like he presided over the Tea Party Scandal in which Obama directed the IRS to attack and hobble hundreds of Tea Party non-profits.   It seems like a main goal of the prosecutorial misconduct was to point to the goal of "make sure it doesn't happen again."

Hmmm....what else Reggie Walton been doing.....well it looks like he was the one that got McCabe off the hook.

But Reggie Walton also made the call that the woman who married not just 1 ISIS fighter, who then died, but then married another ISIS fighter and then wanted to "come home to USA" but her passport had been revoked in 2016.   Walton held that she did not have a passport or visa and could not therefore come to the USA.    Good job!

We know that Supreme court justice John Robert is compromised.    Obama reapproved the vast spying program in Dec 2012, also expanded it's scope.    Roberts appointed Reggie Walton to be the presiding judge for the FISA court in Feb 2013. 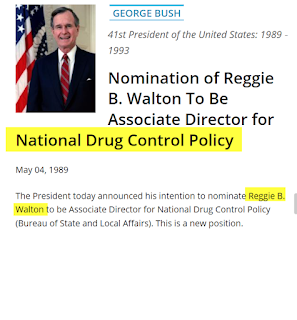 Reggie Walton was on the front lines, starting in 1989.    Any one with any sense knew this war on drugs was going to make smaller and stronger and more dangerous drugs become the choice of smugglers and dealers.     But Walton and Bush pushed on with "instinct" and incarcerated a crap load people to the "full extent of the law", and really screwed the pooch on that gambit that backfired.

In September 1989, Bush astonished the American public by brandishing a bag of crack cocaine during a nationally televised address. The drug, a seemingly bemused president remarked, “looked like candy, but it’s turning our cities into battle zones, and it’s murdering our children.”