Quick Revisit to the Neo-Corona Virus

I've been trying to focus on work tasks that must be put in the rear view mirror.

I have been kind of in a "let's see what happens" mode.    Figuring my best strategy is to live healthy, plenty vitamin D3, probiotics, Iodine/Selenium, good exercise and sleep.   And in a pinch, I can pretty much isolate for months without a problem.

LOL been using my "Bio Scarf" when out and about.   More on that later.   Price is double and triple what these used to be.

Liberalism, at least as modified by the narratives of the Globalists, approaches that of a mental disease.     Cause and effect cannot be linked, because feelings and "doing the right thing on high moral ground" are more important than thinking 1 checkers move ahead.

John Fujiwara, a friend of the visiting Japanese had spent around a half hour with the infected man, on Feb 4th.

He reported himself to State Health Officials, and offered to "self quarantine".

In amazing hubris that could make NOAA look smart, they told him to just go about his normal business, and if nothing happened by the 16th, he could just forget about it.....because.....they are so convinced that they know everything about the incubation time of this virus, conveniently exactly 2 weeks.

For some unexplained reason, state health officials believe the infected Japanese patient didn't have any "prolonged, close contact with Hawaii residents." What we want to know: How can they be so certain of this while claiming to know so little about the man's movements?


Well more than just that....WTF does prolonged contact have to do with anything.   This stuff is highly contagious. 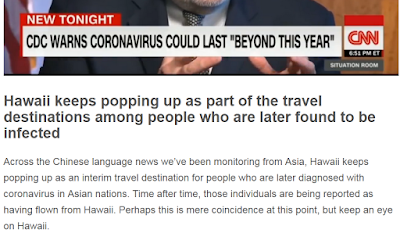 and from Lot's Wife The virus burning through Wuhan (China), a city of 11 million on the Yangtze
River, is vividly represented in this collection of clips. The river connects Shanghai, Nanjing, Wuhan, and Chongqing. Captured by dozens of people with cell phones, the scenes offer a horrifying glimpse of the plague. Residents being shut-in by neighbors fearful of contagion; others being pulled from homes by police. Overwhelmed hospitals the size of several football fields; staff garbed in full protection. Dead piling up in the corridors. Crematories running at full tilt. People are collapsing in the street, in restaurants, on the rail system. Also seen are apparent suicides. Warning - among the clips: Sudden heart attacks and/or pulmonary rupture resulting in frothy blood erupting from mouth and nose.


Director of CDC warns Americans that Wuhan coronavirus is “coming,” will spread widely, and likely last “beyond 2020”
ANALYSIS: The CDC appears to be preparing America for announcement that coronavirus outbreaks are happening in the USA… will Hawaii be the first?
CDC says Americans need to get prepared because coronavirus could “gain a foothold” in U.S.
Pentagon orders NORTHCOM to prepare for coronavirus “pandemic” as fears mount that China can’t stop it from spreading around the world
CORONAVIRUS: Top CDC official warns “we are likely to see community spread in the U.S.” as agency prepares to implement “change in our response strategy”
China reports 33% surge in coronavirus infections over 24 hours, bringing new (rigged) total to over 60,300
CDC coronavirus test kits distributed all across America found to produce false negatives due to failed test kit reagents
CDC accidentally releases infected patient from quarantine, then calls them back… total incompetence will get us killed
Once again, the flu shot proves to be an ineffective joke “medicine” that does nothing but harm people
CDC “Intelligence Officer,” anthrax researcher and African vaccine deployment expert openly admits the coronavirus pandemic is beyond control and will spread globally
Posted by Stock at 12:46 PM