Lets Call This What It Is SARS-CoV-2. We Know A Lot About SARS from 2002 -- Let's Take Back The Narrative 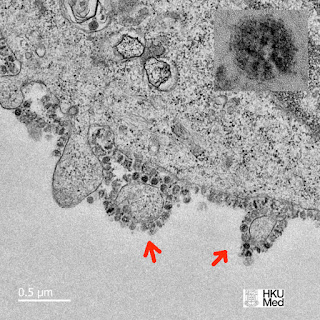 stock here--I have the answer to the salient points below, and will update this later with more information.

1) Spread this far and wide

4) WTF is a Solar Engineer breaking these stories, LOL

That is super important, because we know a lot about SARs, There were many good studies performed after the 2002, 2003 SARS pandemic

To understand what precautions and actions to take now, and what to expect moving forward, a good review of the characteristics of the SARS virus is essential.   Even the curiously chosen name of COVID-19 makes it seem like this is all brand new.   It’s not.

2.      How well it can spread through expelled liquids?

3.      How well it can spread through fomides (carriers of all sorts)?

SARS thrives at 4C, that is not good, that is 40F and the termperature of much of the USA at this time. SARS is "Deactivated" (cannot reproduce, effectively killed) starting at 82F, Common Flu and Avian Flu start being killed at 50F, killed well at 60F, and killed very fast at 70F.   SARS is much more robust than those other Flus


This deserves more coverage, because it can last a long time, up to 27 days, so wiping down a counter or any hard surface, has to  be done correctly or you are just creating a false sense of security.

6.      What kind of latency period it has?   That means how long can you have it, be possibly spreading it, and have no symptoms.

At least 5 days, but other accounts have shown up to 2 weeks and even more.

Well this is kind of a crap shoot?   SARS (1) killed 10% but it was restricted to Asia and temperatures were kind of warmer.    When you look at % in terms of deaths per confirmed test, then obviously the number of tests are super critical.    Data from Italy and USA seem to be pointing to somewhere around 5% to7% but obviously more testing would drop that number.    The talking heads who are so confident, while not even realizing that this is SARS, are cock sure that it is 0.5% to 1%.

What size is it?

Look at the Graphic above.    Size doesn't matter than much when it comes to filtration, because transmission is likely through liquids in a cough or sneeze, and these particles will be trapped by most masks.  Any mask is better than no mask.

We “know” all of this, but somehow the whole world is in a guessing game.    A game of questions, uncertainty, fear, panic.    And when we have not correctly identified the enemy, then it is inevitable that we will make non optimal decisions on an individual, Local, State and Federal levels.