"They" talk about flattening the curve, which makes sense.    But who knows what the "curve is going to look like.

I created a Model I call "2 Day Leap" 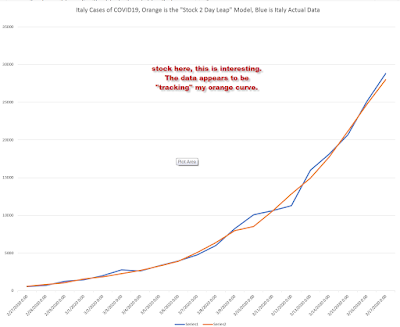 My model is doing an excellent job on Italy, for the last 10 days, average error was 5.59%, sometimes high, sometimes low, but averaging nicely to track the "real data".

The real data may have flaws too, this is a tough time, people have real work to do, not just fill out reports.

"2 Day Leap" is a pretty good Model to predict Italy CV19 Cases.   It's doesn't have 10 fancy factors, like some IPPC model, it's simply a numbers game.

But it works pretty well.   Of the last 10 days estimated, the average error for that day was 5.5%.   The the numbers game is sometimes high, sometimes low, so on an ongoing basis, it is nicely predictive.

But this model, for now, just goes one direction, up.   Eventually, as the population "runs out", either
by having immunity via a really cranked up amount of T-cells (white blood cells), or if it happens, immunity via a vaccine, and a certain percent of people will have "natural immunity"......it will level off and then go  down.

I will work that into the equation, probably based upon total population size in relation to total amount of people affected, had cases, or are found to have natural immunity.    And gruesome, but obviously, those dead should not be infecting anyone new. 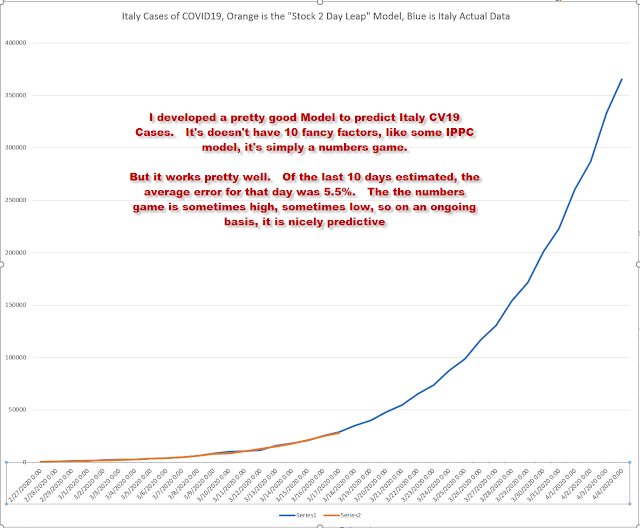