51 Pages -- The Plan For Covid-19, the WHO, Fauci, Madonna, All Kicked Off By an Executive Order?

Someone sent me this PDF and it is pretty weird.   It starts off, methinks, a bit too conspiratorial, but then launches into a good chronological history, including many of the topics and science that I have covered from the beginning including the ideas that

1) This is SARS
2) We know a lot about SARS
3) When not just the Media, but the Medical Establishment pretend that this is all new, we know nothing about it, you know something is up.
4) The urging of Americans not to use masks---well you know something is up.
5) The insanity in New York, AFTER NY politicians urge everyone to keep going on with life as normal.    And the the over reaction.    Looks like a political move.    Andy and Big Mike for president?    There is no other reason why Biden would be the current nominee.
6) Madonna and Fried Fish, and now "we are all equal"....
7) Hmmm, what other Country beside USA is extremely anti-Globalist.....could it be Italy?

Madonna has always been interesting.   I mean if you mean to denigrate a society, disrupt moral values, maybe you would name a character after one of the most holy females of the most popular religion and then make her a satanic slut, complete with fame and fortune.

Dig into that PDF.    When you know the story line, the facts fall into place, the daily happenings are less mysterious, and you see it play out in real time.

Why is 3-11 such an important day?   Read the PDF too, and my earlier coverage on 311
http://www.thepeoplehistory.com/march11th.html 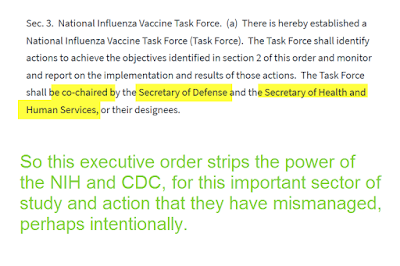 Section 1.  Findings.  (a)  Influenza viruses are constantly changing as they circulate globally in humans and animals.  Relatively minor changes in these viruses cause annual seasonal influenza outbreaks, which result in millions of illnesses, hundreds of thousands of hospitalizations, and tens of thousands of deaths each year in the United States.  Periodically, new influenza A viruses emerge from animals, including birds and pigs, that can spread efficiently and have sustained transmission among humans.  This situation is called an influenza pandemic (pandemic).  Unlike seasonal influenza, a pandemic has the potential to spread rapidly around the globe, infect higher numbers of people, and cause high rates of illness and death in populations that lack prior immunity.  While it is not possible to predict when or how frequently a pandemic may occur, there have been 4 pandemics in the last 100 years.  The most devastating pandemic occurred in 1918-1919 and is estimated to have killed more than 50 million people worldwide, including 675,000 Americans.