stock here, OK I am game 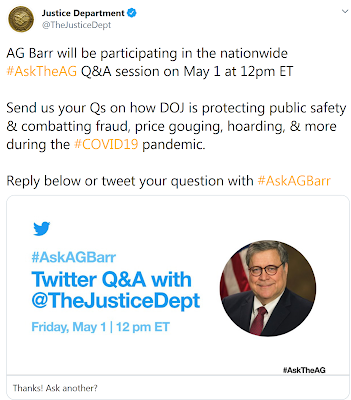 Mr. Barr I am referring Governor Evers of Wisconsin for prosecution under


Deprivation Of Rights Under Color Of Law

Section 242 of Title 18 makes it a crime for a person acting under color of any law to willfully deprive a person of a right or privilege protected by the Constitution or laws of the United States.
For the purpose of Section 242, acts under "color of law" include acts not only done by federal, state, or local officials within the their lawful authority, but also acts done beyond the bounds of that official's lawful authority, if the acts are done while the official is purporting to or pretending to act in the performance of his/her official duties. Persons acting under color of law within the meaning of this statute include police officers, prisons guards and other law enforcement officials, as well as judges, care providers in public health facilities, and others who are acting as public officials. It is not necessary that the crime be motivated by animus toward the race, color, religion, sex, handicap, familial status or national origin of the victim.

"Are there plans to curtail the sensationalistic and exclusively one-sided "mistakes" being reported by the media with regard to our government as well as the pandemic?"

"Do you feel the intelligence communities (FBI/CIA/NSA/DNI, etc) are now trustworthy partners for the DOJ and court systems"

"Are there plans, within the DOJ to evaluate judges prior rulings as well as maintaining an evaluatory system to catch problems henceforth?"

"Are there companies/individuals within the pharmaceutical industry facing investigation due to withholding valid therapies/cures for diseases, Covid-19 being just one of these diseases?"