Basically This SARS-2 COVID-19 is Done, The Exponents Prove That It's Over

stock here with some real news.    The bullshit is over.    Although this was a real virus, they ran with it as a shitshow out of the gate when they changed the name from SARS-2 to the more mysterious "never had anything like this ever" COVID-19

The death rate is going down in all varieties of US life, from the largest most densely populated, to the the most rural.

I suspect that directly (suicide) and indirectly (poor health, socialization, exercise) the antics of the Cabal will still cause hundreds of thousands, maybe up over 1 million deaths.   We will see that in the data, but I doubt that CDC will continue to publish the data.    CDC needs to be scrapped, they aren't doing shit, with over a $10B budget.

But don't be shocked at them causing 1 Million "extra" deaths due to over sheltering and financial harm.    They would kill 50 Million if that was what was required to maintain their power, wealth, privilege.   No quarter, no mercy.

So I had some time, and wanted to slap back at the DC Mayor saying their peak would be in early July......She went on TV on Easter Sunday and lied her ass off, with a total disservice to her constituents and the country overall.    And she totally throw in several race baiting episodes also.

With this knowledge, now watch how "they" try to spin things.   They want destruction of the American economy.    Monday AM Fauci was saying "there is some improvement but the death rate is still going up".....Bullshit!    Total Deaths are going up.

One of their memes is going to be.....we need to stay watchful and do nothing at least until May.....under Trump's shelter in place law.    Watch for it.

The death rate is going down in all varieties of US life, from the largest most densely populated, to the the most rural.

The proof is below, the exponents don't lie.

Its already here.    And the data supports it.   Click on the charts for a larger view. 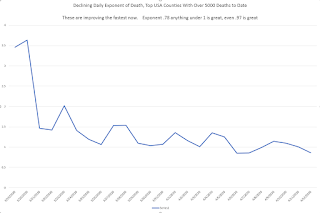 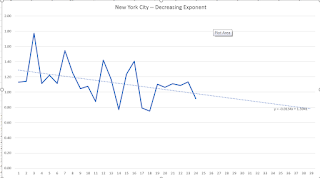 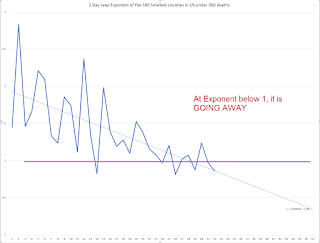 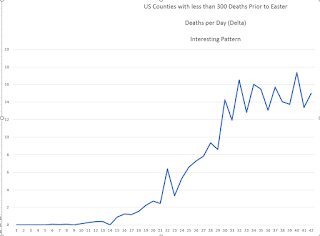