Jesuits -- The Most Organized Of The Evil Societies -- Fauci, Madonna, the Pope 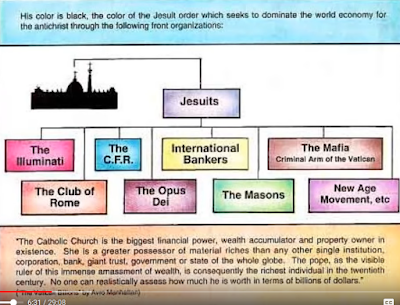 I have long knew, a priori, that the Jesuits were trouble.

Fauci, around 17:40 gets discussed, along with his taller wife who specializes in Bioethics.   She went to Georgetown University which is a Jesuit university.    She is also a SJW which is always questionable for anyone in real power.

Sharpton: “Let me ask you uh, uh this. When did it occur to you in, in your capacity that this was, uh, a problem that would reach pandemic proportions? We had all kind of reports about when, uh, Washington was notified, the Congress, the White House, when did it occur to you that we were in real danger here?”

Fauci: “You know it occurred, well there was always this thought that there was some danger. But when we got to the point where it was clear that some of the misinformation that we initially got from China–because remember, their first cases were reported at the very end of December, December 31st. They said it was something like 24 cases in this wet market where these exotic animals are sold and there’s a human-animal interface. And, and The proposal that was made by the authorities in China where this was just jumping from an animal to a human, and it wasn’t spread from human-to-human. Then it became clear when you look back that it was likely in China that there was human-to-human spread. By the time we got that information and we started getting cases here, it was, ‘well, it’s not efficiently spread from human-to-human.’ But as soon as it became clear that there was community spread, which means that it isn’t just a travel-related case, that there are cases that are in the community under the radar screen, then it became clear that we were in real trouble.”

Fauci: “Well, that was probably towards the middle to end of January.”

Sharpton: “Okay. And, and what did you begin advising the administration and those authorities that we were in fact seeing something different here and this could be a major problem at that time?”

Fauci: “You bet. And then, then that’s when it became clear that there are a couple of ways of addressing that. You could either prevent or try to block the influx of new cases from out of the country, and already cases had come in from China, to try and say, ‘That’s it, we got to stop that because now we already have cases here.’ And then it switched to Europe. And when Italy had their outbreak, it became clear that that became a danger. So that’s when cases were cut off from coming in from Europe and then ultimately the U.K. But by that time we had enough cases in our own country that the ability to do the containment slipped then into the need for mitigation and we saw what happened in New York.”