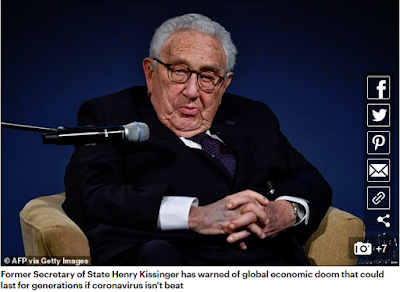 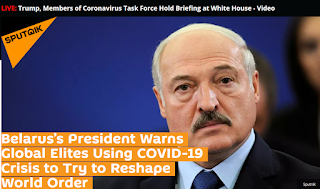 Those awaken will see through the narrative.    Please chime in your own comments or "favorite phrases".

maintains public confidence in Americans’ ability to govern themselves.

Sure Hank.....Americans could so much better be governed by someone else, sure, my my my.

The surreal atmosphere of the Covid-19 pandemic calls to mind how I felt as a young man in the 84th Infantry Division during the Battle of the Bulge. Now, as in late 1944, there is a sense of inchoate danger, aimed not at any particular person, but striking randomly and with devastation. But there is an important difference between that faraway time and ours. American endurance then was fortified by an ultimate national purpose.

Now, in a divided country, efficient and farsighted government is necessary to overcome obstacles unprecedented in magnitude and global scope. Sustaining the public trust is crucial to social solidarity, to the relation of societies with each other, and to international peace and stability.

Nations cohere and flourish on the belief that their institutions can foresee calamity, arrest its impact and restore stability. When the Covid-19 pandemic is over, many countries’ institutions will be perceived as having failed. Whether this judgment is objectively fair is irrelevant.

The reality is the world will never be the same after the coronavirus. To argue now about the past only makes it harder to do what has to be done.

The coronavirus has struck with unprecedented scale and ferocity. Its spread is exponential: U.S. cases are doubling every fifth day. At this writing, there is no cure.

Medical supplies are insufficient to cope with the widening waves of cases. Intensive-care units are on the verge, and beyond, of being overwhelmed. Testing is inadequate to the task of identifying the extent of infection, much less reversing its spread. A successful vaccine could be 12 to 18 months away.

The U.S. administration has done a solid job in avoiding immediate catastrophe. The ultimate test will be whether the virus’s spread can be arrested and then reversed in a manner and at a scale that maintains public confidence in Americans’ ability to govern themselves.

The crisis effort, however vast and necessary, must not crowd out the urgent task of launching a parallel enterprise for the transition to the post-coronavirus order.

Leaders are dealing with the crisis on a largely national basis, but the virus’s society-dissolving effects do not recognize borders. While the assault on human health will—hopefully—be temporary, the political and economic upheaval it has unleashed could last for generations.

No country, not even the U.S., can in a purely national effort overcome the virus.

Addressing the necessities of the moment must ultimately be coupled with a global collaborative vision and program. If we cannot do both in tandem, we will face the worst of each.

Drawing lessons from the development of the Marshall Plan and the Manhattan Project, the U.S. is obliged to undertake a major effort in three domains.

First, shore up global resilience to infectious disease. Triumphs of medical science like the polio vaccine and the eradication of smallpox, or the emerging statistical-technical marvel of medical diagnosis through artificial intelligence, have lulled us into a dangerous complacency.

We need to develop new techniques and technologies for infection control and commensurate vaccines across large populations. Cities, states and regions must consistently prepare to protect their people from pandemics through stockpiling, cooperative planning and exploration at the frontiers of science.

Second, strive to heal the wounds to the world economy. Global leaders have learned important lessons from the 2008 financial crisis. The current economic crisis is more complex: The contraction unleashed by the coronavirus is, in its speed and global scale, unlike anything ever known in history.

And necessary public-health measures such as social distancing and closing schools and businesses are contributing to the economic pain. Programs should also seek to ameliorate the effects of impending chaos on the world’s most vulnerable populations.

Third, safeguard the principles of the liberal world order. The founding legend of modern government is a walled city protected by powerful rulers, sometimes despotic, other times benevolent, yet always strong enough to protect the people from an external enemy.

Enlightenment thinkers reframed this concept, arguing that the purpose of the legitimate state is to provide for the fundamental needs of the people: security, order, economic well-being, and justice. Individuals cannot secure these things on their own.

The pandemic has prompted an anachronism, a revival of the walled city in an age when prosperity depends on global trade and movement of people.


The world’s democracies need to defend and sustain their Enlightenment values. A global retreat from balancing power with legitimacy will cause the social contract to disintegrate both domestically and internationally.

Yet this millennial issue of legitimacy and power cannot be settled simultaneously with the effort to overcome the Covid-19 plague. Restraint is necessary on all sides—in both domestic politics and international diplomacy. Priorities must be established.

We went on from the Battle of the Bulge into a world of growing prosperity and enhanced human dignity. Now, we live an epochal period. The historic challenge for leaders is to manage the crisis while building the future.

Failure could set the world on fire.

Mr. Kissinger served as secretary of state and national security adviser in the Nixon and Ford administrations.


-----
Gates "we were pushed by Trump to rush the vaccine work" little did we know that unexpected consequence that the "vaccine" killed everyone who had a conservative attitude....
Posted by Stock at 1:41 PM