An Open Letter to Judge Sullivan -- And A 5 Minute Run Down, Everything You Need to Know About Flynn 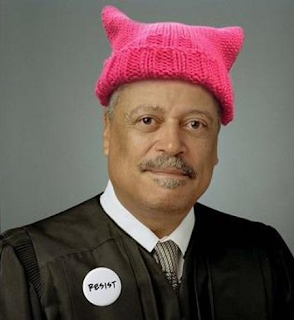 I saw this using the threadreader app, which takes a series of tweets and makes them into a smoother flowing read.

It's about the Judge who "presided" over the General Flynn debacle.   An open abuse of the "Justice" system.   These people have been installed into power, and they will do anything to keep it, and to help their "buddies".

I haven't vetted this, at all.    But it deserves a dig.   There is no "American Way" when the system is chock full of bad actors. 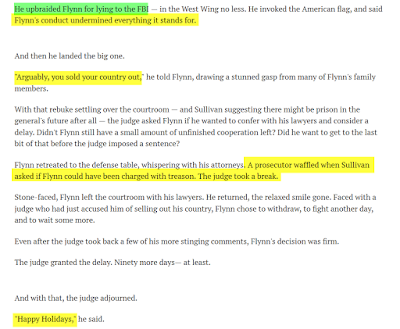 I have vetted this though.....this Judge cannot for a second be considered to be impartial.  On Dec 18, 2018 he infamously, and incorrectly accused Flynn of treason....he did not even understand the charges against Flynn.    He also indicated the Flynn disgusted him and that he had disdain for Flynn.

Wow, any Judge so arrogant to just state things like that in a court room, and think that he shouldn't be debarred for having some personal opinions and emotions as part of his decision making process.

The graphic to the right is from this link from ABC


WASHINGTON — A federal judge abruptly postponed the sentencing of President Donald Trump’s first national security adviser, Michael Flynn, on Tuesday, saying he could not hide his disgust for Flynn’s crime of lying to the FBI and accusing him of selling out his country.


“Arguably you sold your country out,” Sullivan told Flynn, who was flanked by his attorneys.

The judge added: “I can’t hide my disgust, my disdain.”

Google is blocking most results related to this judicial debacle....rewriting history is absolutely necessary for the Cabal.

Finally I have gotten to the bottom of the idea that the DOJ ;/FBI had used threats against Flynn's son
to get Flynn to plead guilty, and that backup is contained about 80% of the way down in this most detailed and excellent article by the Federalist, which is a must read, so read it. 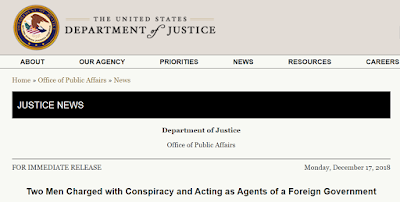 But this is super important, it shows very clearly that the DOJ was acting specifically to "hold Flynn hostage", the day before Flynn's sentencing, Dec 17, 2018 they issued an indictment Rafiekian and Alpetkin for Conspiracy and Acting as Agents of Foreign Government, AND they called Flynn and Flynn's son as witnesses.    They left it open that Flynn and his son could be also included into that indictment by rolling in the "mysterious" Person A and Company A which is quite a transparent way to threaten the Flynns.

Direct from the DOJ
https://www.justice.gov/opa/pr/two-men-charged-conspiracy-and-acting-agents-foreign-government


Remember when he openly accused Flynn of treason and his clerks had to correct him during lunch break and he had to correct the record in the afternoon?  He seems to have some deep seated obsession with Flynn, and by extension Trump...because his behavior is bizarre and unprecedented.  He's ruining his career.  This might be dementia stuff.

Saying that others are saying it is fake, is fake.

he got paid $530,000 (his company actually) for several months of lobbying for a Dutch company owned by a Turkish private citizen.     He was not lobbying for the country of Turkey.

So technically, he didn't have to register as a foreign agent, but he did in March 2017 to prevent any pot shots from coming his way in that behalf.   You know if pot shots could have been taken they would have been taken.    It's a nothing burger.   Compare that to Clinton getting paid $500,000 for a 1 hour speech?

This is the best source and timeline to explain.
https://www.courthousenews.com/flynn-says-lobbying-may-helped-turkey/

May 15th 2020, 25 tweets, 5 min read
Mr. (judge🤔) Sullivan,
I had hoped all along that you would do the right thing, that you would realize that what you're trying to hide is known by people on both sides. I had hoped in knowing that you would consider the situation moot and do the right thing.
You did not. Instead you turned to your friends for more political favors and cover. So maybe exposing some of those crimes will prompt you to recuse yourself. It's obvious you can't be relied upon to do your job impartially and dismiss all charges, exonerating General Flynn.
We have met. I have unfortunately worked with Elijah Cummings on more than one occasion. The latest was when he asked me to "assess" the viability of his wife's political campaign. The access granted for that proved very very interesting.
Quick question "your honor", over the years how many millions of dollars in government funds did yourself and your buddy Elijah Cummings siphon off of Howard University? I guess you were right when you said " they don't need it they never amount to anything".
On a side note, I think it's very kind of you to help your a good friend Cummings in his little multimillion-dollar insurance fraud scheme.

Like he said no one's ever going to get a police search warrant for federal judges house.
What better place to hide a bunch of "stolen" art work. I especially like the two of you have in your private office at home.

You don't have any intention of giving those back do you?
But I digress.
Besides the money laundering and the insurance fraud for yourself and your friends. Should we talk about the cases that you have corrupted for money or favors?

Perhaps I should point out the non politically advantageous cases where you just stuck it to the defendant because you could, or because you didn't like them or their race, or because you had "fixed" so many other cases you had to make some of them look "normal". Any comment judge?
Because it's about to get worse.
There was a "secret" deal in your courtroom, a deal threatening General Flynn's son. You can pretend it was a secret but you knew about it the entire time. You colluded with the prosecutor continuously. But all that's very obvious now.

An innocent man faced with evil, evil against himself and his son. An honorable man, an intelligent man with integrity, a warrior, will stand in front of his son against any evil.

An evil plan that you knew of an allowed to happen. Then you pretended not to know anything about it.
And when it did finally come out you did not rebuke the prosecution for it.

General Flynn fell on a sword for his son, you cannot ask for a greater love or respect. I know it well, I had to do it for my wife and my family.
We just discussed a relationship between a father and his son. One of the strongest bonds in this world and beyond.  I understand you are a father as well.

Normally I would not discuss children but since your children figure so prominently in shaping your decisions on the bench I will go ahead and include them here.

You have two sons, both of them violent no good pieces of crap that Daddy has had to cover for their whole life.

One in particular, your namesake. That must be a particular thorn in your side.
In 2012 he was arrested for the violent assault and rape of an underage girl. He beat and raped her for several hours at his home, and when he was "finished" with her, he left her laying on the floor while he went and watched television.
He didn't give her another thought until approximately an hour later when he went to use the bathroom and she was still laying in the same spot, unresponsive.

Did he call an ambulance out of concern? No. He left the house and called you from his car.

You wanted to know who it was.  Obviously this has happened before and you wanted to know how bad clean up was going to be this time. This time it was the daughter of a "family friend", someone who owed you a lot, someone you had enriched, and abusing your authority as usual you knew you could cover it up.
Instead of calling 911 because of"recordings", you instructed your son to call the local fire department directly. (Real shame they keep a recorded line as well) and when dispatched to your sons address found the girl lying against the wall in the bedroom, still unresponsive.
They got her to the hospital, saved her life, she was bleeding externally and internally, another hour and she would not have made it, saving daddy's little namesake a murder charge.
But the ambulance company called the police and reported it, so your son was arrested. There was no way out the evidence was overwhelming so you and Cummings, and Rod took care of it.

Lost in the system, no disposition.

Still on the books but never made it to court.
Your son must be very lucky have you as a father. The girl was not as lucky. That was in 2012, this is 2020, this summer she'll be old enough to take her first legal drink.

I don't know what she'll celebrate if she does, her life has been very difficult. Everything she's had to
go through, including her own family, her father that you control, telling her to "get over it".

She has a lot to get over, at least she will never be burdened with a child like your buddy Obama says, no concessions for her, too much damage for that.
But you managed to bury it. Fast forward a few more years and the same son is picked up in a multi-state sting of online pedophiles. I'm sure all those pictures and videos he was trading, all those children oh, I'm sure they were asking for it too.
Back to your friends, Cummings, Catherine Pugh, Rod.
Funny how your friends are corrupt or convicted. With that previous charge still on the books you really had to call in some favors to make this go away. Close to 900 people picked up, you managed to make that case disappear somewhere in between the state and federal level, with some RR help there.  Wouldn't want him to pay for the crimes he committed would we?

You owe so much to so many people and they are really pulling your strings now aren't they?
You are unfit for the bench you do not
Posted by Stock at 7:51 AM