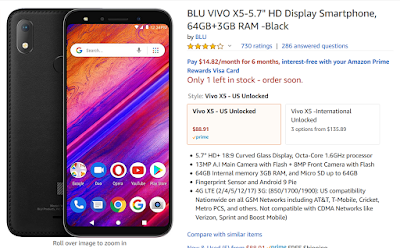 For the redoubtable JIM STONE, of course.

I made sure I listed ONLY the HIGHEST GRADE UNLOCKED phones in these price ranges, you can't get anything better for the price unless you agree to be tied to a carrier (which I'll never do again). I did not just do a lazy listing of the first cheap removable battery crap that came up. These are the good ones.

Removable batteries are a tricky thing, a nearly identical phone won't have a removable battery even from the same maker, if you order a different phone the battery probably won't be removable. I spent a fair amount of time ferreting these out.

(Keep in mind, this is a VERY cheap 3G phone from a half way decent maker. It will be slow but functional. The description does not mention the battery but I went through the questions until it was mentioned and there it said it was removable. Also keep in mind that there are plenty of morons that expect an IphoneX for less than $50 so the rating on this phone is bogus.

(this is not nearly as high spec as the BLU listed above, but it's an LG if that matters to you and it is not total crap)

This is has similar specs to the $59 BLU and is probably a step up. Very good specs.

this is the highest spec phone I could find with a removable battery. It is not mentioned in the description but the reviews say it is removable.