So basically, unless you were a total statistical tech geek, there is no way that you could have caught them with such blatant data manipulation.    I mean at least the climate warmistas try to cover their tracks with come kind of an excuse.

This deserves a congressional investigation.

On April 9th, I downloaded some data files from CDC, and did analysis on them and wrote an article, which is here.
https://www.nukepro.net/2020/04/it-looks-like-total-flupneumonia-deaths.html

I archived, an uploaded to Box so I could share the actual data with anyone who wanted it.

Here is the Excel (CSV actually, but saved into Excel) from box from that article

Only up to March 17th, There has been criminal manipulation of the Data Set,
by Adding in 31,891 Deaths 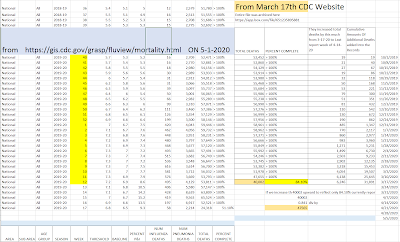 Noted that when I visited the site today, 5-1-20, that they had added a large "Disclaimer"  pop up window, and I copied that and put it at far bottom, for the record.

For the record, screen cap comparison of their chart presentation. 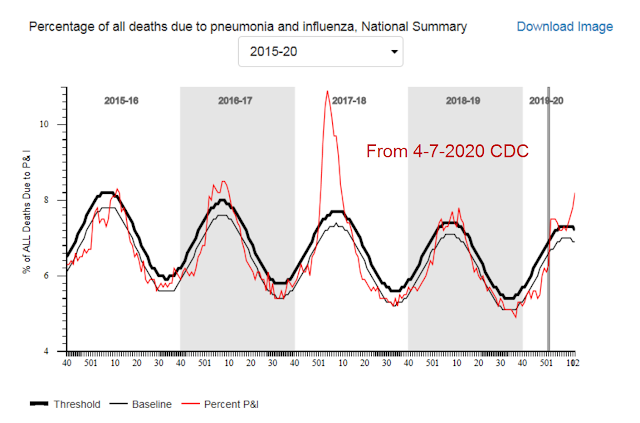 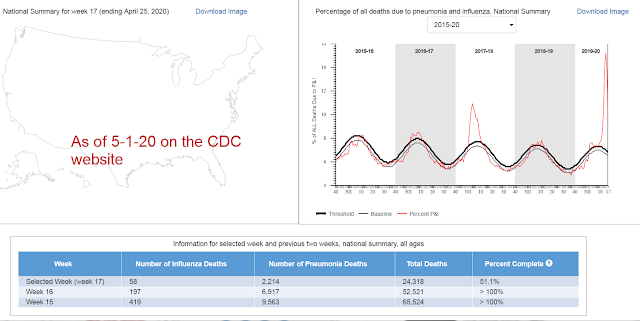 I have not vetted this source, and could not find this exact table on the CDC website, so take it for what it is worth.


Apparently CDC has revised the CV numbers and the 55k alleged CV deaths were actually flu! I can’t believe they are admitting it, but it is officially on CDC website.https://t.co/Z7eAxmNQ4A pic.twitter.com/Jpr6YObXzS
— Phyllis Camera (@CameraPhyllis) May 1, 2020 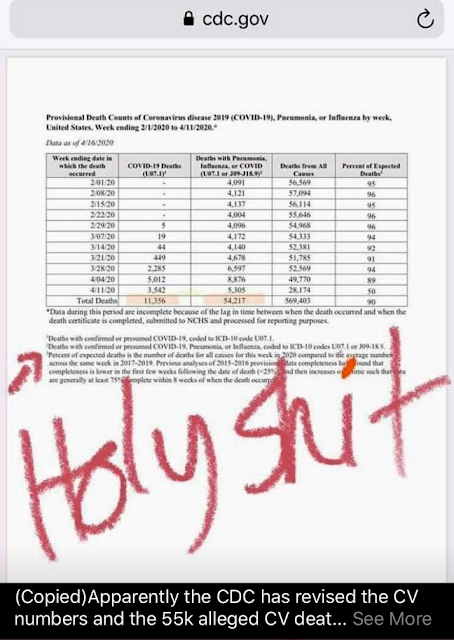 The National Center for Health Statistics (NCHS) collects and disseminates the Nation's official vital statistics. NCHS collects death certificate data from state vital statistics offices for virtually all deaths occurring in the United States. Pneumonia and influenza (P&I) deaths are identified based on ICD-10 multiple cause of death codes.

NCHS Mortality Surveillance System data are presented by the week the death occurred at the national, state, and HHS Region levels.

Data on the percentage of deaths due to P&I on a national level are released two weeks after the week of death to allow for collection of enough data to produce a stable percentage.

States and HHS regions with less than 20% of the expected total deaths (average number of total deaths reported by week during 2008-2012) will be marked as insufficient data. Collection of complete data is not expected at the time of initial report, and a reliable percentage of deaths due to P&I is not anticipated at the U.S. Department of Health and Human Services region or state level within this two week period.

The data for earlier weeks are continually revised and the proportion of deaths due to P&I may increase or decrease as new and updated death certificate data are received by NCHS.
The seasonal baseline of P&I deaths is calculated using a periodic regression model that incorporates a robust regression procedure applied to data from the previous five years.

An increase of 1.645 standard deviations above the seasonal baseline of P&I deaths is considered the “epidemic threshold,” i.e., the point at which the observed proportion of deaths attributed to pneumonia or influenza was significantly higher than would be expected at that time of the year in the absence of substantial influenza-related mortality. Baselines and thresholds are calculated at the national and regional level and by age group.