In Late March, I was refining my declining exponent model.   I freakin' nailed it!

I called for the peak by April 6, and "pretty much over" by Cinco de Mayo.    It won't be over quite that quick, but Italy did great....they "flattened the decline rate", which is perfect.    The inoculated the mass population and likely get no second wave.

Places that crushed the curve and are still locked down are going to sorely regret that maneuver, me thinks. 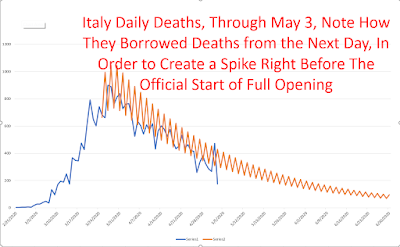 Italy Daily Deaths, Through May 3, Note How They Borrowed Deaths from the Next Day, In Order to Create a Spike Right Before The Official Start of Full Opening
Posted by Stock at 11:33 AM