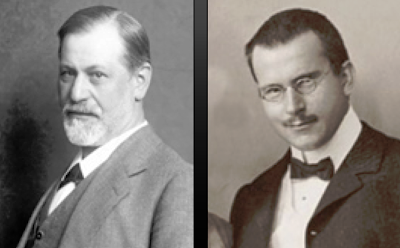 Long a fan of Carl Jung, famed pyschologist.   Picture is Freud and Jung, amazing they lived in the same time, and were at the same time, colleagues and competitors.

I have "the shining" in quite many ways.   Travelling back in time is much easier than travelling forward in time, although they are both possible.     I have been drawn to Scotland and the Megalyths and Druid places of meditation, "visions".    I had kind of a great awakening 4 and 5 years back, about my true nature, one where you walk around in a daze, functioning and doing things, but always and forever aware that things are far, far different than what you thought they were.

I have kind of felt this way since my earliest remembered thoughts when I was maybe 3 or 4, and I realized that I was more than just a kid reacting to an environment, that I had my own thoughts and my own perceptions that did not just come as a result of what I saw with my eyes or what my parents said.   So for 5 decades I suspected something was not as it seemed, but then you get into life and the rigors of trying to run a business in a basically marxist corrupt society (Hawaii) and you just don't give much time to "the puzzle"

Our collective unconscious let's us be aware of things that happened even thousands of years back, maybe even 40,000 years back, when the earth magnetic reversal caused a rash of GCRs and human mutations, leading to lots of time spent in caves, and some of the most impressive artwork performed by humans.

I wish to further "prove" the collective unconscious by examining the idea of our instincts.   Sure some type of pattern behavior can be tranferred via DNA, but isn't it beyond obvious that the full range of instincts is way too broad to be all hard wired.     Thoughts?

Please read it.    I started my blogging career as a technical chartist, mainly focused on stocks, bonds, commodities, precious metals, and global economics.     I found that a close watch of charts in real time could actually predict the future.

Now for sure, sometimes these are actions caused by insider trading, but other times I have seen predictions that could not be insider trading, for instance, Fukushima which became my second passion to write about.    And let me go on record, AGAIN, based mostly on scientific data, but also a precognition, that Moana  Loa is locked and loaded for an eruption.

And the last few days of earthquakes, following a massively long period of low KP index (allows GCRS to "charge" certain magma chambers.), and to be triggered probably by a fast moving space rock, or more likely mixed magnetics, even a  concatony of Cycle 24 and Cycle 25 mixed magnetics happening at the same time.

Our Local Yellow Dwarf is still VERY quiet, and NOAA is throwing down an amazing predictions of 2 more years of quiet.     This would make the longest "cycle" ever recorded by modern humans.


To validate their results, the researchers compared their findings to pseudo-data that they generated for September 11, and plotted in the same format. The simulated results, in contrast to the real ones, showed no long sustained periods of strong deviation from the expectation.
The researchers found an even more unsettling peculiarity  in the data. “One of those measures started changing four or five hours before the first plane hit,” Nelson explains in the video.
That might seem to suggest the possibility that humans possess not just a collective consciousness, but also some degree of precognition–an even more controversial hypothesis, if that is possible. (From the National Geographic Channel’s Mysterious Science blog, here’s a post from earlier this year on the work of retired Cornell University psychologist Darryl J. Bem, who published this provocative scientific journal article on his experimental findings that humans have some ability to predict events before they occur.)