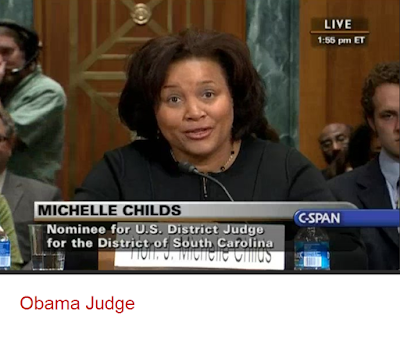 What a disgusting piece of work this person is.

I found a witness for my mail in ballot at the height of the pandemic.   Tire counter guy at Costco, LOL.

And it needed a 56 page ruling?   Seriously?

They build using stupidity on top of stupidity, to justify even more stupidity......see here

In her ruling, Childs stressed the dangers of the disease, noting such events such as South Carolina’s closing all public schools for the school year and the high numbers of elderly and African Americans who were being stricken.


“During this pandemic, absentee voting is the safest tool through which voters can use to effectuate their fundamental right to vote,” Childs wrote.

Noting that the Election Commission lawyers had argued that the possibility of voter fraud made the witness requirement necessary, Childs said they had offered no evidence that voting fraud existed in South Carolina other than a mention of a “voter-buying scandal from the 1980s.”

These judges basically do whatever they are given orders to do.

Going back to 2014 she ruled that SC ban on same sex marriage as unconstitutional.   The first ruling of it's kind in the south.

This same judge ruled on the horrifically over budget and no chance of working technology, for the ill-fated MOX plant in South Carolina.

We know from Fukushima that MOX fuel can and does blow up in a Moderated Prompt Criticality.
Arnie Gunderson confirming our suspicion and Statement on MOX in this email:

But in 2017 Judge Childs (reminder, Obama judge) was pressing the Federal Gov to comply with the US/Russia agreement to process and get rid of plutonium stockpiles, and MOX was one way to do that.   Her goal was to push the MOX project forward.....gettting billions more in Federal funds into her State.   Big projects = big kickbacks.   Plus the bonus of extremely risky technology that could blow up in the USA and further cripple the USA.

Oh, one pesky point.    In 2016 Russia pulled out of the agreement.....but this POS Judge thinks we still have to comply with the agreement?

In 2016, Russia suspended participation in the PMDA, alluding to MOX delays. Lt. Gen. Frank Klotz with the NNSA, said in a previous conference call with reporters that MOX is only one of several reasons Russia cited for suspending the deal.