Rosenstein -- Rather Than a Weasal, He Was a Mole. Why Indeed Did He Get The Hero's Send Off That He Did 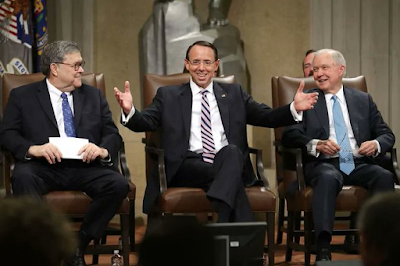 I knew from watching the final send off for Rosenstein, that he got some kind of deal.   He acted swampy while in reign, but it appears that was his job.

To collect evidence against the Cabal players, while pretending that he was one of them.

An undercover agent.    Note the genuine camaraderie in this photo?

Sessions and Rosenstein are still going to be testifying at the trials as witnesses.

Not defendants, in case you are confused about that.

The dates on the indictments will reveal all these SpyGate investigations began under Rosenstein.