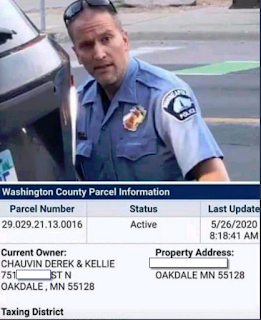 stock here, about time for some "real false flags", be frosty folks, I mean check your security systems of all sorts.   This ain't over yet.

3 Officers were fired immediately.   That never happens....there is a reason for that, to fan the flames, literally more quickly.    Cops always get a paid suspension, pending investigation.  Always.


The Deep State would set off a nuke bomb in an expendable city and kill 1,000,000 to prevent whats coming.

It is odd that a police officer would murder someone, obviously on video, when they had 5 cops there, could be easily handled George Floyd although he was big.    And they could have tased him.    He was down on his face, so they could easily handcuff him. 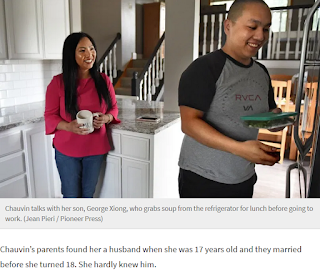 And what of that "gate keeper" the dumb, short, fat looking diversity hire who kept people away while the LEO murdered the black guy.    Name:Tou Thao, A Huong as if The main murderers wife who is a beauty pagent model and pretty successful.

This guy was in 4 police shootings.    I know multiple retired LEOs who never fired their service revolver during police work (except range practice, and they used to do a lot)

Did you note, the black guy had a quality large eagle tattoo across his chest, just saying.

Another black man says the same cop tried to kill him in 2008
https://news.yahoo.com/minneapolis-man-cop-kneeled-george-162701960.html


The Minneapolis police officer shown on video kneeling on George Floyd’s neck as Floyd pleaded for help, along with another officer who stood by and watched, have both been involved in use-of-force incidents over their careers. Officer Derek Chauvin has been identified as the officer pinning down Floyd in the now-viral video, which shows Floyd saying he can’t breathe repeatedly before losing consciousness. Floyd later died. Four officers on scene have been fired. They have not yet been officially identified by department officials.

Chauvin, 44, is a 19-year department veteran. Department records and news accounts show that he has been involved in several police-involved shootings over his career. In 2008, Chauvin shot and wounded Ira Latrell Toles during a domestic assault call. According to a 2011 article from the Pioneer Press, Chauvin and other officers showed up to an apartment in south Minneapolis just before 2 a.m. Toles grabbed for an officer’s gun and Chauvin shot him in the abdomen.

In 2006, Chauvin and five others responded to a stabbing. After Wayne Reyes, 42, allegedly pulled a shotgun on the officers, one of the officers shot and killed Reyes, according to a report titled “Stolen Lives” from Communities United Against Police Brutality, a police watchdog nonprofit based in Minneapolis. The other officer identified in the video is Tou Thao.

According to a deposition he gave in a 2017 lawsuit, Thao started with the department as a community service officer. He went through the academy in 2009. He was laid off for two years and returned to the department in 2012. In 2017, Lamar Ferguson sued Thao and another officer, Robert Thunder, for excessive use of force.

According to the lawsuit, Ferguson and a woman who was eight months pregnant were walking home when Thao and Thunder stopped and searched them without cause. The officers handcuffed Ferguson, and Thao threw him to the ground and began punching him, while Thunder kicked him, according to the allegations.

The officers took Ferguson to the hospital for medical treatment. Afterward, they escorted Ferguson to jail wearing only his underwear and T-shirt, rejecting hospital staff’s requests that he be allowed to fully dress, according to the complaint. In a deposition, Thao said they arrested Ferguson due to an outstanding arrest warrant.

He said he only punched Ferguson after one of Ferguson’s hands slipped out of the handcuffs.“He tries to pull away,” Thao said in the deposition. “And he puts his hands on me and tries to give me a stiff arm in a way to try to get me off of him. After — at this point he’s actively resisting arrest.

He — so I had no choice but to punch him. I punched him in the face. It causes him to pause a bit which gives Officer Thunder the time to come around and help.”The case settled out of court for $25,000, according to Seth Leventhal, one of Ferguson’s attorneys.