oh my, the visuals, LOL

A reader sent this in, ACD, a brother in data and the fractal expansion of conspiracies.

It's worth a read.   I wish I had the snippet of Pompeo declaring the Plandemic as a "live exercise".

Washington State and Washington DC are huge curses upon the USA.   So it's nice to have one nice "Washington" Story.    And at the far bottom, see the chart of Washington State, as they "test spiked" their Death Data.   A small sample is here.

A horrific abuse of data.   Their daily deaths were dropping below 10, and then they just "found a bunch of deaths" and spiked it to 73!     They did this is conjunction with Oregon as a "test spike"  and then 2 days later the "Gang of 10" States all spiked their Death numbers in unison, 2 days before many states were set to "open up" as they wanted to maintain and increase the fear, the psychological damage, the economic damage.   What punishment is appropriate for that?

In Washington County, Wisconsin, 9 days before the State Supreme court bitch slapped our weasly little weak Governor Evers, the famous shooting range nearby opened up with no fan fare, no news stories, no public announcement…..they just opened up.

I have a handful of “tools” that I have never put a round through, and this is not the time to be complacent.   So I sent in my $240 initial membership fee and the recommendation from my fathers marine boot camp friend who writes so well for 2nd Amendment perspectives that he gets front page editorials in the horrifically liberal rag called the Journal Sentinel.

The COVID-19 SCAMdemic winds down.  Turns out SoS Mike Pompeo ("it's a live exercise") can tell the Truth, at least as that one snippet on video attests.  Here you may have, for free, a peak behind the curtain at on-going works of the Wizard of the Powers That Be, a striking piece of evidence (audio-video) not yet purged completely from interstices of the internet.

I shall say this about that.  I hold the belief that the COVID-19 psychological operation had multiple objectives and layers of action.  The dialectics involved seem more like a practical application of human fractals.

Wikipedia informs us (or not) that "in mathematics, a fractal is a self-similar subset of Euclidean space whose fractal dimension strictly exceeds its topological dimension. Fractals appear the same at different levels, as illustrated in successive magnifications of the Mandelbrot set.  Fractals exhibit similar patterns at increasingly small scales called self similarity, also known as expanding symmetry or unfolding symmetry; if this replication is exactly the same at every scale, as in the Menger sponge, it is called affine self-similar. Fractal geometry lies within the mathematical branch of measure theory."

Merriam-Webster comes to the rescue (or not) with this definition.  "any of various extremely irregular curves or shapes for which any suitably chosen part is similar in shape to a given larger or smaller part when magnified or reduced to the same size".

Human fractals elaborate(s) along a dimension encompassing international, national or state, states of states, cities of states of states, townships and unincorporated (!) territory -- wherever humans live subject to control.  I can tell you with personal certainty that the game continues.  Major stars on the roster of one team include Big Pharma, 5G, Data Sweepers integrally linked with AI, Big Media, Big Finance, Big Politics, etc.  You will need a scorecard, I assure you, during the coming months.

For now, friends and desponding correspondents, the denouement of this play (!), the first of a triptych.  Misfortune does come in three's we be told.

Version 1.  Courtesy of the State of Washington.

WA Governor Jay Inslee has announced that any citizen of the state who refuses to be tested for COVID-19 will be locked down at home—not even permitted to go out and buy groceries.

Zero Hedge: “As the press conference went on, one question kept coming up – what about enforcement? How will you ensure Washington State residents comply and what if they don’t?”

REPORTER: “When it comes to contact tracing, how are you guys going to handle people or families who want to refuse to test or to self isolate?…If they want to leave their home to get groceries I know you’ve said they can’t do that; how will you make sure they don’t?“

GOVERNOR JAY INSLEE: “We will have attached to the families a family support person who will check in with them to see what they need on a daily basis…and help them. If they can’t get a friend to do their grocery shopping, we will help get them groceries in some fashion. If they need pharmaceuticals to be picked up, we will make sure they get their pharmaceuticals…That’s going to help encourage them to maintain their isolation too.”

The first thing to know about Governor Jay Inslee: under President Bill Clinton, he served as a regional director for the US Dept. of Health and Human Services. HHS is in charge of the CDC.

Inslee is, therefore, actually a PUBLIC HEALTH OFFICIAL. That means, as governor of WA, he’s already on the team of Fauci and Birx clones who have staged state coups and are usurping and destroying human rights, including the right to make a living.

When Inslee ran for a seat in the US Congress, in 2009-10, among his largest campaign donors were pharma companies.

Then there is Inslee’s connection to Bill Gates, the dark prince of lockdowns, the man who wants to keep the global population in chains until his COVID vaccine arrives.

A clinical trial of a COVID vaccine has begun in Seattle.

During his election campaigns covering 2011-12, Inslee’s top donor was Microsoft (employees and families).

[more at link above]

Version 2.  Courtesy of the City of Atwater, California


In California’s Central Valley, where farmers grow the food Americans eat and shops provide goods for them and their families, the coronavirus era is coming to a close, as Atwater declares itself a “sanctuary city” where businesses and churches are opening their doors.

The San Francisco Chronicle describes the move as “in defiance of the California’s shelter-in-place order,” but the people who live there believe it is about their survival — not from dodging the virus, but from the draconian lockdown that cost people their livelihoods:

The City Council heard from a parade of business owners, pastors and residents on Friday who described pandemic-related hardships. Many insisted they could be responsible and keep the community safe by following safe practices like wearing face masks and keeping social distance.
Resident Caleb Hampton — a lonely voice for upholding the shelter order — said there was little proof people would be responsible in protecting public health, as evidenced by those attending the council meeting, most without masks, including the council members and staff. (Hampton wore a mask.)

“How many people came up and touched this lectern and then was it ever disinfected?” he said. “The council has pressed this narrative that small businesses can be responsible to implement these guidelines on their own … But I don’t see evidence of that in daily activities even here.”

The members of the city council, “without discussion” according to the Chronicle, passed unanimously a resolution “affirming the city’s commitment to fundamental constitutional rights and declaring the city of Atwater a sanctuary city for all businesses.”
Council members said the measure also applies to churches.

“If they don’t open up, they’re going to be in a really bad state, and we’re going to have bankruptcies and foreclosures and we’re just going to have families that are decimated financially,” said Chamber of Commerce President Don Borgwardt, who is also a local pastor and made a plea for people to be allowed back inside houses of worship.

“It’s time to do the right thing and listen to the people who put us here,” Mayor Paul Creighton said in the Chronicle report. “We want you guys to survive and thrive. It’s really critical that the elected in this country and especially this state start listening to you.”

“Creighton later told the Merced Sun-Star that while the city would take no action against anyone who reopened outside the state’s guidelines, local businesses were taking their own risks by reopening,” the Chronicle reported.

“If you do have a state (business) license, that’s between you and the state of California,” Creighton said.

Atwater is in Merced County, California, and has recorded 200 coronavirus cases and six COVID-19 deaths, according to the county website.

On Saturday, County Sheriff Vernon Warnke said on Facebook that he “will not be taking any enforcement action in this county for any of the COVID-19 ‘violations,’” the Chronicle reported.

“The citizens themselves can make informed decisions on how to proceed and protect their lives and livelihood and not the governor of a state,” the Facebook post said.

[More at link above]

Personally, if I still went to movie theaters or watched films on DVD in the comfort of my home -- I do not, a form of mental hygiene -- then I'd choose Version 2. 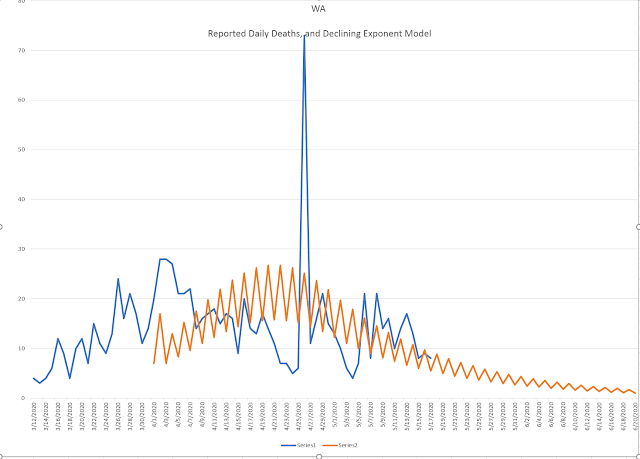