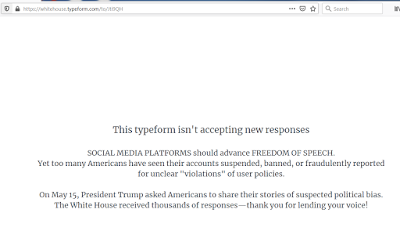 stock here!
from the "why didn't I think of that" department.    They can compile millions of complaints that then
show beyond a shadow of a doubt that outright censorship, as well as an illegal swaying of the narrative, is being conducted.

OK so I did think of this.....now we need a new law that specifically mentions and targets all online electronic tech, which infringe on the rights and privileges of Americans, that those workers, employees, independent contractors, volunteers, board members that do so participate in preventive the truth and freedom of speech from getting to people, are they themselves guilty of a crime that may have civil and criminal penalties. 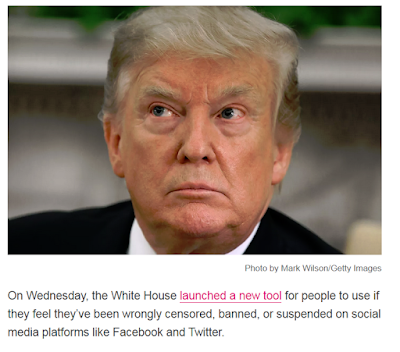 
So now do you think that Big Tech might launch a Denial of Service attack against the USA's
website?


Other members of the Trump family, like Don Jr., have also voiced concern of the deplatforming of right-wing activists. In a tweet last month, President Trump’s eldest son wrote “The purposeful & calculated silencing of conservatives on Facebook & the rest of the Big Tech monopoly men should terrify everyone,” after Facebook announced that it would banning conspiracy theorist Alex Jones along with other far-right pundits and activists.