WHO is Steering the UK Into A Year Of Uneeded Death. Johnson Was Tilting Toward Herd Immunity, Then Fake Models Swung Him To Lockdown Mode 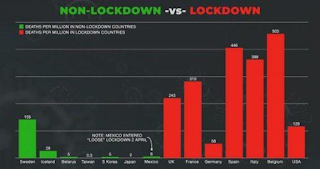 stock here.   I'll finish this later.   Or maybe make a new article on how the WHO and Imperial College leftists totally misled Boris Johnson.   And I am not sure after his near death experience that he is making objective decisions now.

It's great time to add some velocity of money into the economy, and I will do my best with a big ticket Jeep purchase if said test drive passes muster.

The real deaths are still far in the future.   Not from a second wave.   From predictable damage due to unemployment.    37,000 extra deaths for 1% unemployment.

That is the USA statistic, it can be assumed to apply elsewhere.    So if we added 25% unemployment, that is 925,000 deaths in USA to come in the future.

It might not be that bad if we bounce back well.....but the Gang of 10 Governors who are fraudulently padding the death numbers and presenting them in "spikes" in order to prolong the pain, are doing their "best".


Oh you didn't hear that story?   CHECK IT HERE!

Any number of American deaths is acceptable to them, as long as they can prevent the Republicans from controlling the house and the Presidency. 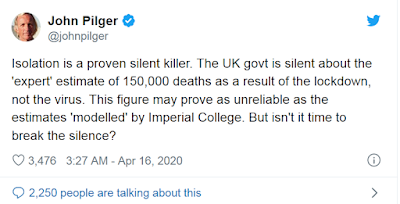 But it might be worse than 925,000 because of all the other damages caused by the shenanighans of the Cabal.

LOSS OF IMMUNE SYSTEMS -- We need to be "challenged" by bacteria, virus, fungi in order to keep our immune system in a strong fighting order.

STRESS -- Do I need to elaborate?

SOCIAL ISOLATION -- Sorry Zoom does not bridge the gap.

DISTRUST -- Do I need to elaborate?

THE LOSS OF TIME AND ENERGY IN THE ENSUING "DISCUSSION".    We might want to put this all behind us and just soldier on.    But I posit that is not the best path.   We need to continue to expose the criminal actors.  There are many.     Q is saying that 99% of FBI are true Patriots.     I believe that is intentional misdirection.   If it was that high we wouldn't have had to wait years to show that there was ZERO proof of any Russian efferey with General Flynn.   If we had even 80% true Patriots, a number of whistleblowers would have been leaking the real information.

FIGHTING BACK AGAINST THE CABAL THAT WANTS A "NEW NORMAL" -- Forced vaccination, forced inserted personal identification, vote by mail, and any number of other "openings" the cabal may try to push their plan.

SHUTTING DOWN THE VOICES OF PUBLIC OFFICIALS THAT SPEAK OUT.