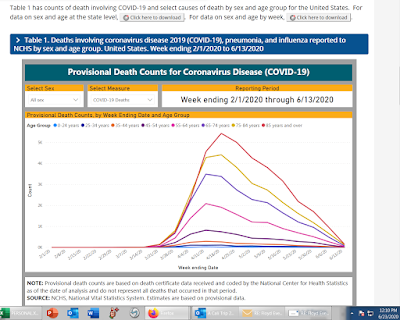 This “type” of research was banned in the USA as it was deemed too dangerous with no justifiable point to it.

The good news first…..from the CDC site today, it sure looks like COVID is pretty much completely gone.    I’ll take a victory lap on that one,  with my March prediction that because of the 82F death temp (Avian flu dies at 45F like most Flu types) I thought that COVID might last into late June or early July.

https://www.cdc.gov/nchs/nvss/vsrr/covid_weekly/index.htm
scroll down about a page

Doctor Fauci is already under extreme investigation in some circles, he handed from what we know as it may be more, $3.7M to the Wuhan lab to conduct this type of “gain of function research”.     He also misdirected us and provided conflicting information which acted to create maximum confusion, just as the WHO continues to do even last week.

Much of the truth can be discovered with simple thought experiments.   Of course masks reduce the spread of the virus for both the wearer and the nearby people.    A simple look at Asian cultures where anyone with a cold will “isolate” with a mask is strong proof.    But in an even more basic manner it is simply about reducing the spread of “spray” from sneezing, coughing, talking.

Thus the recent WHO statement that asymptomatic people have little chance of passing on the virus is totally true.    They are not coughing or sneezing, duh!

And then the WHO immediately walked that one back.    One…..because it would mean that the lockdowns were overblown.     2, it would mean that the next time they want to roll out lockdowns, and thus steal the elections through mail in ballots (which are so much safer than voting in person with an ID)….that people would not be as willing to accept a lockdown and the ramifications.

So the WHO had to “retract” the honest statement that a WHO rep had said.

Also curious that Fauci’s wife, is the one in charge of approving Bill Gates vaccines, especially as related to COVID SARS-2
Posted by Stock at 10:25 AM