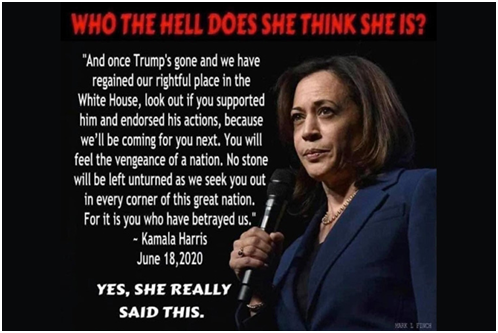 Kamala Harris has promised a communist style purge after Trump
Meaning, obviously, after they steal this next election, and they will. People had damn well better secure the voting process or we are DOOMED. Get a load of this!

DEAGEL WAS NOT BLUFFING. [FYI:  PDF of forecast for USA attached to this e-mail.]  AN INSIDER IS THERE AND KNEW A COMMUNIST PURGE WAS COMING. THE GOAL: KILL 230 MILLION PEOPLE. THAT IS WHAT IT WILL TAKE TO DROP AMERICA'S POPULATION DOWN TO 100 MILLION AS PLANNED. WHITES ARE 70 PERCENT OF AMERICA'S POPULATION. HOW MANY IS THAT? 231 MILLION. THE NUMBERS ADD UP. KAMALA AND CREW ARE GOING TO KILL US IF THEY GET THE CHANCE AND SHE JUST SAID IT. Don't go thinking her saying America is "great" actually means anything, it does not mean she wants that greatness to actually live. They feel jilted for being delayed in their plans by Trump, and they are going to kill every damn last person that supported him. With contact tracing, they have you flagged bagged and tagged.

We had damn well better take this seriously and NOT crack a beer, PREEMPTIVE ACTION IS NEEDED. WE HAVE BEEN WARNED. WE NEED ACTION NOW.

Trump is now openly stating the election will likely be stolen

Why would he say that? ANSWER: Because now he knows he can't trust the national guard, the U.S. armed forces, or ANY OTHER security force he puts to the task of keeping the election from being stolen. He knows this because two hours before last night's rally, the National Guard said the stadium was full and stopped letting people in. He found that out later. If this happened, it means there is so damn much corruption it cannot be overcome. The election WILL be stolen and he knows it.

Look at all the leftist states and how they acted with Antifa. If you think such states are going to turn in accurate results, you're dreaming and Trump just woke up. LAST NIGHT'S RALLY WAS THE WAKE UP CALL, CORRUPTION IN THE SECURITY FORCES WAS WHY ATTENDANCE FLOPPED, THEY TURNED EVERYONE IN THE LAST TWO HOURS BEFORE THE RALLY AWAY AND CLOSED THE GATES AND f***ing VANISHED entirely leaving locked gates behind a full hour and a half BEFORE Pence spoke.

This is a serious issue folks, the nation is so far gone we are easily provably screwed. There is simply too much corruption, the communists are in power EVERYWHERE. The conspiracy theorists were 100 percent bang on (like they all knew they were) and now it's all going to happen absent bloodshed and the use of the 2nd amendment.
The only silver lining in it all is that Trump is calling them out NOW and openly stating they are going to steal it, LONG before the election even happens. I don't know if it is actually going to make a difference if everyone knows, but at least everyone will know.

NOTE TO FRIENDS AND CORRESPONDENTS:

Lest you mistake my purpose in sending the above information, I think it necessary to emphasize, once again, I have allegiance to NO political party; I hold the belief that all candidates for major offices, and many if not most candidates for lesser offices, are puppets of forces that run both "demonrats" and "repugnuts", two wings of the same two-headed bird.  Trump is a puppet, nothing more.

Unless we the people of this soil and land choose NOW to self-govern, we shall deserve what "government" (((they))) bestow upon us.

In my opinion, based on research and study, I also hold the belief that we do have a choice, right now.