Steve Bing, 55, Kills Himself. Sex Addict, Went Too Far, And About To Be Exposed. Epstein Friend.

stock here: Steve Bing.    Just saying, Global systemic pedophilia trafficking is now known, it was not on my radar, but syrup is racist controls the news cycle.

Bing would rather die than be exposed.......
https://en.wikipedia.org/wiki/Steve_Bing


A name hither too unknown.
https://www.dailymail.co.uk/news/article-83477/Steve-Bing--playboy-seedy-side.html


The only things Steve Bing really cared about were movies and sex, an old friend of his once remarked. In dating Liz Hurley - a film actress and one of the most desirable women in the world - both his dreams might have appeared to come true.

What Hurley should have taken heed of, however, is that by the time he hit his 30s, Bing was moaning that all his friends were settling down, marrying and, as he saw it, becoming 'boring'. For the Californian playboy set to inherit an estimated £400 million, boring was never an option. Instead, life revolved around liaisons with Hollywood megastars such as Farrah Fawcett, Sharon Stone and Uma Thurman 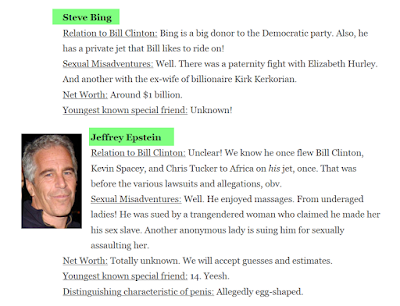